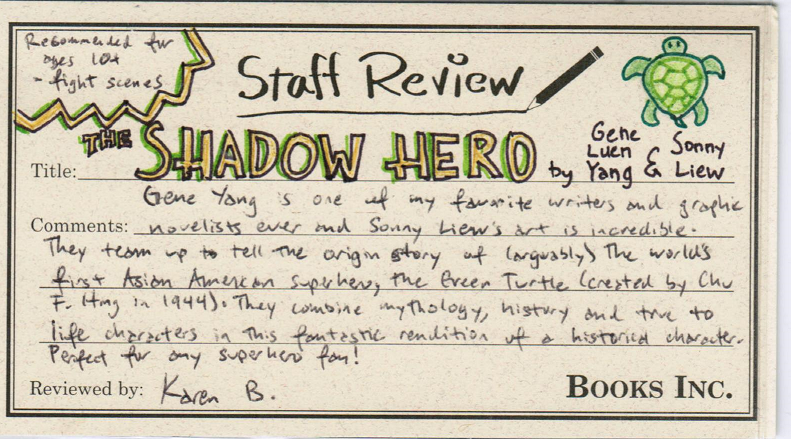 Gene Luen Yang is the National Ambassador for Young People's Literature and is a MacArthur Fellow, a recipient of what's popularly known as the MacArthur "Genius" Grant.

In the comics boom of the 1940s, a legend was born: the Green Turtle. He solved crimes and fought injustice just like the other comics characters. But this mysterious masked crusader was hiding something more than your run-of-the-mill secret identity... The Green Turtle was the first Asian American super hero.

The comic had a short run before lapsing into obscurity, but Gene Luen Yang, the acclaimed author of American Born Chinese, and Sonny Liew, the author of the New York Times-bestseller The Art of Charlie Chan Hock Chye, have finally revived this character in Shadow Hero, a new graphic novel that creates an origin story for the Green Turtle.

This gorgeous, funny comics adventure for teens is a new spin on the long, rich tradition of American comics lore.

Gene Luen Yang writes, and sometimes draws, comic books and graphic novels. As the Library of Congress’ fifth National Ambassador for Young People’s Literature, he advocates for the importance of reading, especially reading diversely. American Born Chinese, his first graphic novel from First Second Books, was a National Book Award finalist, as well as the winner of the Printz Award and an Eisner Award. His two-volume graphic novel Boxers & Saints won the L.A. Times Book Prize and was a National Book Award Finalist. His other works include Secret Coders (with Mike Holmes), The Shadow Hero (with Sonny Liew), New Super-Man from DC Comics (with various artists), and the Avatar: The Last Airbender series from Dark Horse Comics (with Gurihiru). In 2016, he was named a MacArthur Foundation Fellow.

Sonny Liew is a Malaysian-born comic artist and illustrator based in Singapore. He is best known for his work on Vertigo's My Faith in Frankie together with Mike Carey and Marc Hempel, Marvel's adaptation of Sense and Sensibility and The Shadow Hero, a graphic novel written by Gene Luen Yang.

"What America needs is for people to shed the expectation of translation and immerse themselves in other worlds . . . America has to start somewhere, and I’d recommend The Shadow Hero."
—New York Times


"Gene Luen Yang uses his Chinese heritage to create engaging comics that are deeply personal yet rooted in centuries of stories, fictional and true." —LA Times

"Yang and Liew reinvent this character in a brilliant homage that finally allows the Green Turtle to get his long overdue face time." —BCCB, STARRED REVIEW on The Shadow Hero

"There's plenty of humor in this lively, entertaining adventure story . . . At its heart, though, this book is a subtle comment on China's changing cultural landscape and growing multiculturalism in America. A lovingly tongue-in-cheek homage." —Booklist, STARRED REVIEW

“At once humorous and heartbreaking.” —The LA Times on Boxers & Saints