Memoir on Pauperism: Does Public Charity Produce an Idle and Dependent Class of Society? (Paperback) 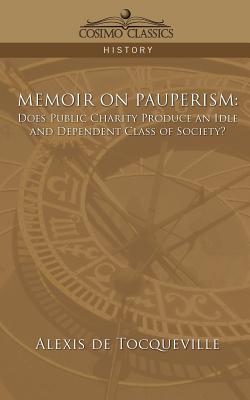 L]egal charity has not only taken freedom of movement from the English poor but also from those who are threatened by poverty. -from "Memoir on Pauperism" Inspired by a trip to England at a time when that nation was in the throes of political, social, and economic strife and poverty was rampant, political philosopher Alexis de Tocqueville developed his theories on civil society as it relates to its poorest members and set them down in this 1835 essay. With keen insight, he explains: . why the richest nations have the most paupers . why private charity is more likely to alleviate poverty than government aid . how good intentions backfire to produce a chronically dependent underclass. The political and economic situations Tocqueville examines are immediately recognizable as one that haunts the world's richest nations today, and his lessons are still to be learned. This is an important book for our unsteady times. Also available from Cosimo Classics: Tocqueville's Selected Letters on Politics and Society. French writer ALEXIS DE TOCQUEVILLE (1805-1859) was born in Paris and practiced law before embarking on travels in America to study the young nation's political experiment. The result, the two-volume Democracy in America (1835, 1840), is considered a classic discourse on 19th-century America.