How the World Is Made: The Story of Creation according to Sacred Geometry (Hardcover) 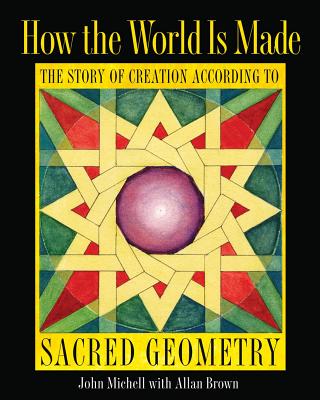 Understanding the role of sacred geometry in cosmology and human affairs

Galileo described the universe as a large book written in the language of mathematics, which can only be read by those with knowledge of its characters--triangles, circles, and other geometrical figures. The laws of geometry are not human inventions. They are found ready-made in nature and hold a truth that is the same in all times and all places and is older than the world itself.

In How the World Is Made John Michell explains how ancient societies that grasped the timeless principles of sacred geometry were able to create flourishing societies. His more than 300 full-color illustrations reveal the secret code within these geometrical figures and how they express the spiritual meanings in the key numbers of 1 through 12. For example, the number 8 and its octagon are symbols of peace and stability, the holy 7 and its seven-sided figure are connected to the world-soul. He identifies the various regular shapes and shows their constructions; their natural symbolism; their meetings, matings, and ways of breeding; and their functions within the universal order. Some are musical and structural, others relate to life and humanity. In the process of making these discoveries, Michell helps us see the world in a new light. Disparate shapes and their corresponding numbers are woven together, resolving themselves into an all-inclusive world image--that “pattern in the heavens,” as Socrates called it, “which anyone can find and establish within themselves.”

John Michell (1933-2009), educated at Eton and Cambridge, was the pioneer researcher and specialist in the field of ancient, traditional science. Author of more than twenty-five books, his work has profoundly influenced modern thinking, including The Sacred Center, The Dimensions of Paradise, The New View Over Atlantis, Secrets of the Stones, and The Temple of Jerusalem: A Revelation.

Allan Brown is a graphic designer who specializes in sacred geometrical figures. He lives in Brighton.

"Readers interested in sacred geometry or in Michell's eclectic body of writings will likely be attracted to this book. . . . may also want to recommend it to those studying numerology."
— Janine DePaulo, New Age Retailer, Holiday 2009

"Those willing to follow along on this enchanted path will find themselves filled with wonder, and a new way of seeing the world."
— Robert Simmons, The Metaphysical Buyers Guide, Holiday 2009

"This is a delightful book: clear, witty, beautiful, and illuminating. It is well worth buying for yourself--and for your friends."
— Rupert Sheldrake, a biologist and author of A New Science of Life, The Spectator, Jan 2010

". . . a beautifully illustrated geometry primer with philosophical commentary. . . . Michell's finest prose--cool, succinct, and rational . . . a time-capsule of ancient wisdom that will eventually find it's way to those ready to receive it. . . . attractive and accessible . . . eventually some future Pythagoras will pick it up and gasp in wonder . . ."
— Steve Marshall, Fortean Times, Dec 2009

". . . looks at how these patterns underlie our whole world since ancient times. . . . a fascinating book."
— Prediction Magazine online, Dec 2009

"His [John Michell] approach serves both as a reconnection with the sacred and as a corrective to the present state of alienation throughout the world."
— Richard D. Wright, New Age Retailer, October 2010

“. . . a brilliant way to introduce the mathematically inclined youth to Sacred Geometry.”
— EarthRites.org, May 2011