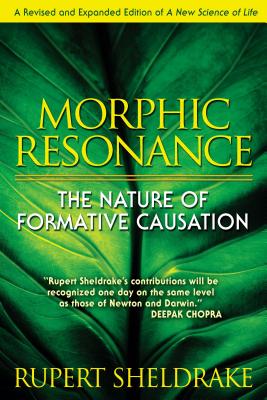 When A New Science of Life was first published the British journal Nature called it “the best candidate for burning there has been for many years.” The book called into question the prevailing mechanistic theory of life when its author, Rupert Sheldrake, a former research fellow of the Royal Society, proposed that morphogenetic fields are responsible for the characteristic form and organization of systems in biology, chemistry, and physics--and that they have measurable physical effects. Using his theory of morphic resonance, Sheldrake was able to reinterpret the regularities of nature as being more like habits than immutable laws, offering a new understanding of life and consciousness.

In the years since its first publication, Sheldrake has continued his research to demonstrate that the past forms and behavior of organisms influence present organisms through direct immaterial connections across time and space. This can explain why new chemicals become easier to crystallize all over the world the more often their crystals have already formed, and why when laboratory rats have learned how to navigate a maze in one place, rats elsewhere appear to learn it more easily. With more than two decades of new research and data, Rupert Sheldrake makes an even stronger case for the validity of the theory of formative causation that can radically transform how we see our world and our future.

Rupert Sheldrake is a biologist, a former research fellow of the Royal Society at Cambridge, a current fellow of the Institute of Noetic Sciences near San Francisco, and an academic director and visiting professor at the Graduate Institute in Connecticut. He received his Ph.D. in biochemistry from Cambridge University and was a fellow of Clare College, Cambridge University, where he carried out research on the development of plants and the ageing of cells. He is the author of more than eighty scientific papers and ten books, including Dogs That Know When Their Owners Are Coming Home; Morphic Resonance; The Presence of the Past; Chaos, Creativity, and Cosmic Consciousness; The Rebirth of Nature; and Seven Experiences That Could Change the World. In 2019, Rupert Sheldrake was cited as one of the "100 Most Spiritually Influential Living People in the World" according to Watkins Mind Body Spirit magazine.

“Sheldrake is an excellent scientist; the proper, imaginative kind that in an earlier age discovered continents and mirrored the world in sonnets.”
— New Scientist

“Well written, provocative and entertaining . . . Improbable? Yes, but so was Galileo.”
— Biologist

“Books of this importance and elegance come along rarely. Those who read this new edition of A New Science of Life may do so with the satisfaction of seeing science history in the making.”
— Larry Dossey, M.D., author of Recovering the Soul and Reinventing Medicine

“For decades, Rupert Sheldrake has been at the leading edge of highly innovative and controversial ideas about the organization of biological systems. Morphic Resonance poses a serious challenge to traditionalists and is a most welcome book about how we see the world and how we should head off into the future.”
— Marc Bekoff, author of The Emotional Lives of Animals and Wild Justice: The Moral Lives of Animals

“Morphic Resonance is destined to become one of the landmarks in the history of biology. It is rare to find so profound a book so lucidly written.”
— Bruce H. Lipton, Ph.D., cell biologist and bestselling author of The Biology of Belief: Unleashing t

“Morphic Resonance presents a revolutionary information-field understanding of the nature and evolution of life. Acquaintance with it is an essential part of new-paradigm scientific literacy.”
— Ervin Laszlo, author of Science and the Akashic Field

“Rupert Sheldrake is one of the most innovative and visionary scientists of our times. Rupert will be both vilified and praised for his theory of morphic resonance. Whatever your personal opinion of his work, he will not be ignored. In my opinion, his contributions will be recognized one day on the same level as those of Newton and Darwin.”
— Deepak Chopra, author of Reinventing the Body, Resurrecting the Soul

"Though his theory has much to say about the nature of evolution and the biological sciences, it also has a lot to say about consciousness, dreams, mental imagery and what I might consider ordinary and extraordinary dream/hypnotic experiences."
— Baywood Reprints, Vol. 28, No. 3, Aug 2009

" . . . Sheldrake has steadily developed into one of the world's leading parapsychologists, conducting groundbreaking research in areas where well-behaved scientists fear to tread."
— EnlightenNext: The Magazine for Evolutionaries, Issue 46, Spring/Summer 2010

"Sheldrake's theories continue to gain verification, and this book is particularly important because its implications affect the way we view the natural world, as well as ourselves, as one small part of it. Morphic Resonance is therefore strongly recommended to anyone interested in understanding current thought about what may lie behind the formation of all natural systems."
— New Age Retailer, March 2010