At Night We Walk in Circles: A Novel (Paperback) 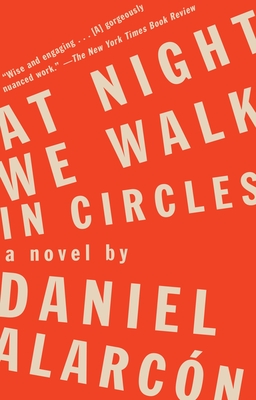 By Daniel Alarcón
$18.00
Unavailable, Out of Stock, or Out of Print

The breakout novel from a prizewinning young writer: a “surrealistic tour de force” (O, The Oprah Magazine) about one man’s obsessive search to find the truth of another man’s downfall.

Nelson’s life is not turning out the way he hoped. His girlfriend is sleeping with another man; his brother has left their South American country, leaving Nelson to care for their widowed mother; and his acting career can’t seem to get off the ground. That is, until he lands a starring role in a touring revival of The Idiot President, a legendary play by Nelson’s hero, Henry Nuñez, leader of the storied guerrilla theater troupe Diciembre. And that’s when the real trouble begins.

Nelson’s fate is slowly revealed through the investigation of the narrator, a young man obsessed with Nelson’s story—and perhaps closer to it than he lets on. In sharp, vivid, and beautiful prose, Alarcón delivers a compulsively readable narrative and a provocative meditation on fate, identity, and the large consequences that can result from even our smallest choices.

Daniel Alarcón is the author of the collection The King Is Always Above the People, longlisted for the National Book Award for Fiction, the novel At Night We Walk in Circles, which was a finalist for the 2014 PEN-Faulkner Award, as well as the story collection War by Candlelight and the novel Lost City Radio. His writing has appeared in the New York Times Magazine, Granta, n+1, and Harpers, and he was named one of the New Yorker's "20 under 40" and a MacArthur "Genius" Fellowship. He is Executive Producer of Radio Ambulante, and teaches at the Columbia University School of Journalism in New York.

Praise for At Night We Walk in Circles

“Consistently compelling . . . Alarcón’s smoothly polished prose [is] flecked with wit and surprisingly epigraphic phrases . . . with lines that knock the wind out of you.”
—The Washington Post

“Outstanding . . . a work that creates a multilayered world and invites you to enter it.”
—Los Angeles Times

“Masterful . . . a sterling novel . . . brave, thoughtful and astute . . . elegant in its construction, it feels perfectly suited to bring Alarcón’s tremendous talent to a wider audience.”
—The Miami Herald