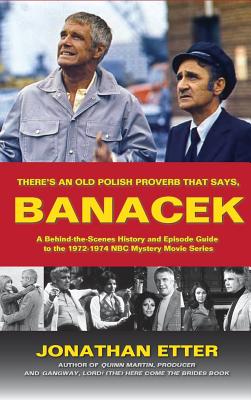 This is the HARDBACK version. "When a wolf is chasing your sleigh, throw him a raisin cookie, but don't stop to bake a cake." This and other famous "Polish proverbs" were often spoken by George Peppard as Thomas Banacek, a detective solving seemingly impossible thefts, in the NBC Mystery Movie series, Banacek (1972-1974). Costars Murray Matheson and Christine Belford helped propel the series into brief but blazing popularity. A Who's Who of 1970s stars rounded out the stories with colorful characters, such as Broderick Crawford, Margot Kidder, Stefanie Powers, Brenda Vaccaro, Penny Fuller, Stella Stevens, Anne Francis, Sterling Hayden, Nancy Olson, Anne Baxter, Victoria Principal, Cesar Romero, Bert Convy, Sue Ane Langdon, and Victor Jory. In There's An Old Polish Proverb That Says, "BANACEK," television historian Jonathan Etter profiles series star George Peppard, and he also brushes back the sands of time to reveal the history of the locked-room, impossible mystery genre. A guide to all 17 thrilling episodes plus commentary from Executive Producer George Eckstein uncovers where and how he and his associates found an inspired twist to time-honored mystery formula. You discover the importance the series placed on numbers and the matching of numbers in the chapter entitled "Decoding Banacek." Series devotees will have considerable opportunity to test their powers of observation and concentration with the 112 Banacek challenges presented in the episode guide (7 challenges apiece for each of the 16 90-minute episodes). Illustrated with dozens of photos from series episodes and George Peppard films. About the author: television historian Jonathan Etter obtained a B.A. in History from Wright State University. His expertise has resulted in the publication of Quinn Martin, Producer and Gangway, Lord (The) Here Come the Brides Book.