Archives of the Airwaves Vol. 4 (Paperback) 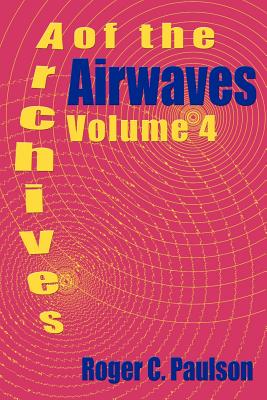 This is volume 4 of the 7 volume set from historian Roger C. Paulson that promises to be the Most Complete OTR encyclopedia ever written. This massive tome has been 20 years in the making and is a MUST for any fan of radio. Biographies of its (even obscure) series and stars, it is the most comprehensive set ever attempted

Everything from A&P Bandwagon to Ivan Cury is covered in Volume 1 in an overwhelming amalgamation of biographical material that is sure to please the casual observer as well as the steadfast researcher of radio and early recorded sound. Birthdates, deathdates, credit lists, cross- referenced with alternate show names, Archives of the Airwaves far surpasses any book on radio history ever before published. Volume 2 contains everything from Dad and Junior to Bob Hope

After high school Roger C. Paulson attended Massachusetts Radio School which led to his FCC First Class Radio Telephone License. At that time the war in Korea was being fought so he enlisted the the Army Signal Corp. He attended The Southeastern Signal School and was then sent to NATO (SHAPE) Headquarters which was at that time located just outside Paris. There he worked at the radio teletype receiver station.

Upon discharge from the army he was hired to build a small radio station (then WWRI) in West Warwick, Rhode Island. After that was completed he moved on toBoston to work in both radio and television at WHDH which later became WCVB. While working with other OTR buffs he began collecting and trading radio shows on tape locally and later with others around the country. He collected over two thousand programs, both old and new books on radio shows. At this point discovering so much contradictory information, he decided to write a bookthat would be as accurate and complete as possible which he titled Archives of the Airwaves. After spendingso much timeat the library reading microfilms ofthe New York Times radio articles, program schedules, and obits; he bought his own microfilm reader and reels and reels of past year's Variety newspaper. He also corresponded by mail (no internet then) and telephone with dozens of radio personalites who at that time had not yet passed away. Finally after twenty years of work and still more years to get his work published it is now available.