Archives of the Airwaves Vol. 3 (Paperback) 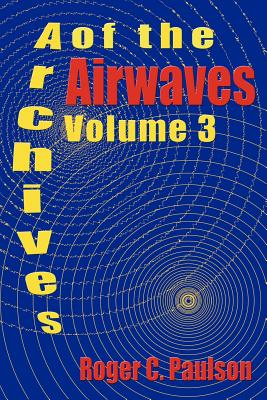 This 10 volume set from historian Roger C. Paulson promises to be the Most Complete OTR encyclopedia ever written. At least seven times the size of John Dunning's On the Air, this massive tome has been 20 years in the making and is a MUST for any fan of radio. Biographies of its (even obscure) series and stars, it is the most comprehensive set ever attempted Everything from A&P Bandwagon to Ivan Cury is covered in Volume 1 in an overwhelming amalgamation of biographical material that is sure to please the casual observer as well as the steadfast researcher of radio and early recorded sound. Birthdates, deathdates, credit lists, cross-referenced with alternate show names, Archives of the Airwaves far surpasses any book on radio history ever before published.

ROGER C. PAULSON began his passion for radio during the 1940's with his juvenile ear glued to the loudspeaker. In 1946, while on a trip to New York City with his parents, he became very excited to actually see live broadcasts of shows he had often heard over the air. All of this eventually led to his forty year career in broadcasting. During the 1970's he began collecting tapes and books on old-time radio. After listening to the tapes and reading the books he decided to author a complete, accurate and readable encyclopedia on OTR he titled Archives of the Airwaves. Some twenty years later, upon completing the time-consuming research and writing, you are now reading the result.