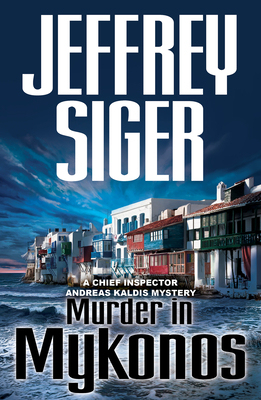 By Jeffrey Siger
$14.99
On Our Shelves Now - Please allow up to 48-hours for Curbside Pickup orders to be processed.

Politically incorrect detective Andreas Kaldis, promoted out of Athens to serve as police chief for Mykonos, is certain his homicide days are over. Murders don't happen in tourist heaven. At least that's what he's thinking as he stares at the remains of a young woman, ritually bound and buried on a pile of human bones inside a remote mountain church.

Teamed with the nearly-retired local homicide chief, Andreas tries to find the killer before the media can destroy the island's fabled reputation with a barrage of world-wide attention on a mystery that's haunted Mykonos undetected for decades.

When another young woman disappears, political niceties no longer matter. With the investigation now a rescue operation, Andreas races against a killer intent on claiming a new victim...

Jeffrey Siger was born and raised in Pittsburgh, Pennsylvania, practiced law at a major Wall Street law firm, and later established his own New York City law firm where he continued as one of its name partners until giving it all up to write full-time among the people, life, and politics of his beloved Mykonos. The Mykonos Mob is the tenth novel in his internationally best-selling and award nominated Chief Inspector Andreas Kaldis series, following up on An Aegean April, Santorini Caesars, Devil in Delphi, Sons of Sparta, Mykonos After Midnight, Target: Tinos, Prey on Patmos, Assassins of Athens, and Murder in Mykonos.The New York Times described Jeffrey Siger's novels as "thoughtful police procedurals set in picturesque but not untroubled Greek locales," and named him as Greece's thriller writer of record. The Greek Press called his work "prophetic," Eurocrime described him as a "very gifted American author...on a par with other American authors such as Joseph Wambaugh or Ed McBain," and the City of San Francisco awarded him its Certificate of Honor citing that his "acclaimed books have not only explored modern Greek society and its ancient roots but have inspired political change in Greece." He now lives in Greece.