The Complete Poems of Sappho (Paperback) 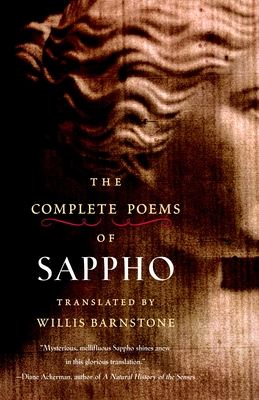 A vivid, contemporary translation of the greatest Greek love poet—with a wealth of materials for understanding her work—by a prize-winning poet and translator

Sappho’s thrilling lyric verse has been unremittingly popular for more than 2,600 years—certainly a record for poetry of any kind—and love for her art only increases as time goes on. Though her extant work consists only of a collection of fragments and a handful of complete poems, her mystique endures to be discovered anew by each generation, and to inspire new efforts at bringing the spirit of her Greek words faithfully into English.

In the past, translators have taken two basic approaches to Sappho: either very literally translating only the words in the fragments, or taking the liberty of reconstructing the missing parts. Willis Barnstone has taken a middle course, in which he remains faithful to the words of the fragments, only very judiciously filling in a word or phrase in cases where the meaning is obvious. This edition includes extensive notes and a special section of “Testimonia”: appreciations of Sappho in the words of ancient writers from Plato to Plutarch. Also included are a glossary of all the figures mentioned in the poems, and suggestions for further reading.

Born in Lewiston, Maine, Willis Barnstone was educated at Bowdoin, Columbia, the Sorbonne, and Yale. He taught in Greece at the end of the Civil War (1949–51), and in Buenos Aires during the Dirty War. During the Cultural Revolution he went to China where he was later a Fulbright Professor at Beijing Foreign Studies University (1984–85). Former O'Connor Professor of Greek at Colgate University, he is Distinguished Professor of Comparative Literature and Spanish at Indiana University.

A Guggenheim Fellow, his awards include a National Endowment for the Arts award, a National Endowment for the Humanities award and four Pulitzer Prize nominations for poetry. His work—which includes Modern European Poetry—(Bantam, 1967), The Other Bible (HarperCollins, 1984) and Poetics of Translation: History, Theory, Practice (Yale, 1993)—has appeared in, Harper's, New York Review of Books, Paris Review Poetry, the New Yorker, and the Times Literary Supplement.

“Mysterious, mellifluous Sappho shines anew in this glorious translation, and Barnstone’s masterful introduction locates her historically, unveils her impassioned life, and reflects on the sensuous grace of her poverty, revealing the woman as she’s never been seen before.”—Diane Ackerman, author of A Natural History of the Senses

“I have Sappho with me all the time now, as this collection is absolutely stunning in every respect, and I'm filled with gratitude to you for having borne it into the world. May your Sappho be blessed. It is a tremendous gift to all of us.”—Carolyn Forché, author of The Country Between Us and The Blue Hour

“A feast for those who, like me, are hungry to know more about the great poet Sappho. The translations of the poems and fragments read elegantly and the introduction and supporting material are lavishly informative and interesting.”—David Ferry, translator of Gilgamesh and The Georgics of Virgil

“What a joy to have Willis Barnstone’s Sweetbitter Love. This is not only a vivid, sensuously elegant translation of every scrap of Sappho we have; the wonderful introduction is designed to increase our ardor as well as our knowledge, and the appendix containing everything the ancients said of her as well as poetic tributes up through Baudelaire’s is itself a treasure.”—Alicia Ostriker, author of No Heaven and Stealing the Language

“As a student I treasured the original Barnstone Sappho, and it is a joy to have this new version made current with the latest scholarship and enriched by four decades of further reflection. Sappho’s famous voice is clear and powerful, even in the shards that remain to us, and Barnstone embraces and captures this phenomenon like no one else. This is a Sappho rendered with wisdom and heart for newcomers and connoisseurs alike.”—Jeffrey Henderson, Editor, Loeb Classical Library

“What amazes me is how Sappho’s lyrics, composed in the seventh century B.C.E., transcend their time and place to enchant us now. In lines that are at once passionate and precise, seemingly artless and yet magical, she writes of the cycles of life and death, and of erotic desire as a sacred calling. She looks into the burning center of things, and expresses pure wonder in the evening star, the moon, birdsong. Willis Barnstone’s masterful translations capture her excited praise for the things of this world, making one of her prophetic observations shine with lasting truth: ‘Someone, I tell you, in another time, / will remember us.’”—Grace Schulman, author of Days of Wonder and The Paintings of Our Lives

“If there is any final justice, which there probably isn't, the world of letters would erect a monument of Willis Barnstone and strew it with fresh wildflowers every day. I think of this Sappho collection as the finest among Barnstone’s prodigious achievements.”—Jim Harrison, author of True North and Legends of the Fall

“Sappho knew that we never tire of learning: passion makes the moment eternal. Willis Barnstone has plumbed profound layers of the ancient Greek to bring us Sappho. On his way to her, he renewed the Gnostic Gospels and the Gospels proper. Now he has sounded the deepest lyric rock of our founding and given us new sound.”—Andrei Codrescu, NPR commentator and author of It Was Today: New Poems

“Willis Barnstone has brought a life dedicated to translation and a lifetime of immersion in the Greek language to give us these new and inspired translations of Sappho. With its brilliant introduction and dazzling notes, this is the book of Sappho you will want on your bedside table.”—David St. John, author of The Red Leaves of Night

“Eros has been riding Barnstone’s back for years, whipping him across Spanish, French, Greek, Chinese poetry, across the poetry and prose of the biblical lands to translate from those literatures poetry, to make them new and his. Now he has embraced Sappho, with whom he has been in love for years. What he has made ‘his’ is a gift to us. Barnstone—lover, poet, and scholar—cannot make Sappho’s fragments whole, but he makes us more aware of our loss than any other translation. He gives us the abyss, and fragments of Sappho in startling English—a few words that in ancient Greek changed its music and made the walls of the city tremble.”—Stanley Moss, author of Asleep in the Garden


“Although she lived on the Greek island of Lesbos in the seventh century B.C.E., the universal feelings that Sappho expressed still connect us, human to human, across the ages. It seems improbable that a new version of ancient writings could shed new light, but Barnstone’s translation of Sappho does just that.”—Booklist

“In the last few decades, there have been many translations of Sappho’s work by gifted and well-meaning writers. None quite fills out these solitary, orphaned lines with the same rhythm and feeling. Barnstone is one of the greatest translators of literary expression from a foreign language into English. We are lucky to have him.”—New Letters