Exploration Fawcett: Journey to the Lost City of Z (Paperback) 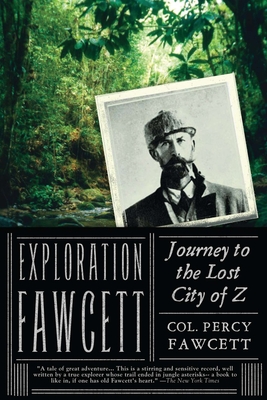 By Percy Fawcett
$15.95
Unavailable, Out of Stock, or Out of Print

The inspiration for the major motion picture "The Lost City of Z," mystic and legendary British explorer Colonel Percy Harrison Fawcett spent 10 years wandering the forests and death-filled rivers of Brazil in search of a fabled lost city. Finally, convinced that he had discovered the location, he set out for the last time toward destination “Z” in 1925, never to be heard from again.This thrilling and mysterious account of Fawcett’s ten years of travels in deadly jungles and forests in search of a secret city was compiled by his younger son, Fawcett's companion on his journeys, from manuscripts, letters, and logbooks. An international sensation when it was first published in 1953, Exploration Fawcett was praised by the likes of Graham Greene and Harold Nicolson, and found its way to Ernest Hemingway's bookshelf. Reckless and inspired, full of fortitude and doom, this is a book to rival Heart of Darkness, except that the harrowing accounts described in its pages are completely true. To this day, Colonel Fawcett's disappearance remains a great mystery.