The Cost of Living: Early and Uncollected Stories (Paperback) 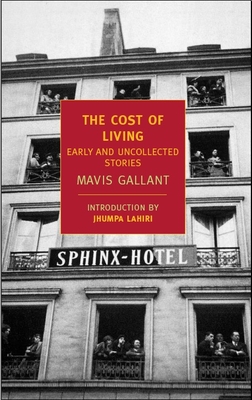 A New York Review Books Original
Mavis Gallant is renowned as one of the great short-story writers of our day. This new gathering of long-unavailable or previously uncollected work presents stories from 1951 to 1971 and shows Gallant's progression from precocious virtuosity, to accomplished artistry, to the expansive innovatory spirit that marks her finest work.

"Madeleine's Birthday," the first of Gallant's many stories to be published in The New Yorker, pairs off a disaffected teenager, abandoned by her social-climbing mother, with a complacent middle-aged suburban housewife, in a subtly poignant comedy of miscommunication that reveals both characters to be equally adrift. "The Cost of Living," the extraordinary title story, is about a company of strangers, shipwrecked over a chilly winter in a Parisian hotel and bound to one another by animosity as much as by unexpected love.

Set in Paris, New York, the Riviera, and Montreal and full of scrupulously observed characters ranging from freebooters and malingerers to runaway children and fashion models, Gallant's stories are at once satirical and lyrical, passionate and skeptical, perfectly calibrated and in constant motion, brilliantly capturing the fatal untidiness of life.

Mavis Gallant was born in Montreal and worked as a journalist at the Montreal Standard before moving to Europe to devote herself to writing fiction. After traveling extensively she settled in Paris, where she still resides. She is the recipient of the 2002 Rea Award for the Short Story and the 2004 PEN/Nabokov Award for lifetime achievement. New York Review Books Classics has published two previous collections of Gallant's stories, Paris Stories, selected and introduced by Michael Ondaatje (2002), and Varieties of Exile, selected and introduced by Russell Banks (2003).

Jhumpa Lahiri is the author of the short-story collections Unaccustomed Earth and Interpreter of Maladies, and of a novel, The Namesake. Her interview with Mavis Gallant appeared in the summer 2009 issue of Granta.

“Often, her fiction drew its energy from contradictory qualities: her stories were minutely observed but also suspenseful, matter-of-fact but also fanciful, reportorial but also imaginative. They were broad-minded, and so felt real…it feels as concrete as anything you might read in the newspaper or see with your own eyes. Gallant had a rare gift: a solid imagination.” —The New Yorker

"Gallant has, over a long career, deftly documented women on the boundaries between childhood and adulthood, between their native home and their adopted home. As such, it's fitting that the stories in The Cost of Living are mostly strays and tales left out of the 1996 volume The Collected Stories of Mavis Gallant, including her first-ever published piece, 'Madeline's Birthday' from 1951. It's about time they've been brought in from the cold and seated snugly on your bedroom nightstand." --Jessa Crispin, NPR's "Books We Like"

“Mavis Gallant’s insights into her characters are achieved with breathtaking economy and rightness of detail. She is a terrifyingly good writer.”—Margaret Atwood

“[Mavis Gallant’s] talent, exercised for many years in Parisian exile, is as versatile and witty as it is somber and empathetic.”—John Updike

“Gallant’s stories relentlessly ask a few unanswerable and essential questions about our bewildering human condition. We come away from her stories with a keener knowledge of ourselves.”—Alberto Manguel

"One of the finest practitioners of the short story in the English language." --The New York Times

"One of the great story writers of our time." --Michael Ondaatje

“One of the most brilliant story writers in the language, who deserves to be read as widely as her fellow Canadian Alice Munro. No one writes about brutish people like Gallant; she transforms the meanest human specimens into subjects of high fascination and sympathy, which makes her excellent reading for overheated festival subway commutes.” --Alexandra Schwartz, The New Yorker