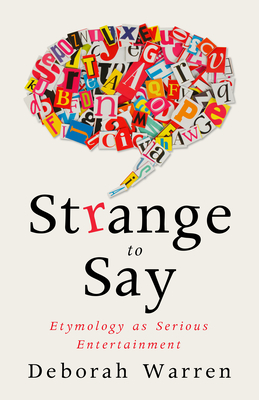 " Warren's] curiosity and embrace of the unpredictable, as well as her delight in both the archaic and the homespun, animate Strange to Say, a tour of English that savors the language's mutability."―Wall Street Journal "A great read for those who appreciate seeing the whimsy in words, as Warren remarkably achieves etymological entertainment."―Booklist

"You can't stop language, because when all's said and done is never." In her witty account of the origins of many English words and expressions, Deborah Warren educates as she entertains―and entertain she does, leading her readers through the amazing labyrinthian history of related words. "Language," she writes, "is all about mutation." Read here about the first meanings of common words and phrases, including dessert, vodka, lunatic, tulip, dollar, bikini, peeping tom, peter out, and devil's advocate. A former Latin teacher, Warren is a gifted poet and a writer of great playfulness. Strange to Say is a cornucopia of joyful learning and laughter. Did you know... Lord Cardigan was a British aristocrat and military man known for the sweater jackets he sported. A lying lawyer might pull the wool over a judge's eyes--yank his wig down across his face. In the original tale of Cinderella, her slippers were made of vair ("fur")--which in the orally-told story mistakenly turned into the homonym verre ("glass"). Like laundry, lavender evolved from Italian lavanderia, "things to be washed." The plant was used as a clothes freshener. It smells better than, say, the misspelled Downy Unstopable with the ad that touts its "feisty freshness," unaware that feisty evolved from Middle English fisten--fart.

Deborah Warren is the author of four books of poetry--Connoisseurs of Worms, The Size of Happiness, Zero Meridian, winner of the New Criterion Poetry Prize, and Dream With Flowers and Bowl of Fruit, winner of the Richard Wilbur Award--and a translation of Ausonius: The Moselle and Other Poems. Warren's writing has appeared in the New Yorker, Paris Review, Poetry, and other publications, and she has won the Robert Penn Warren Prize, Howard Nemerov Award, Robert Frost Award, and Meringoff Award for her work. She lives in Massachusetts.