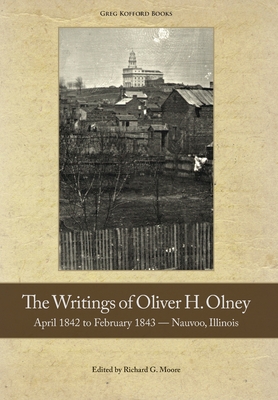 Oliver H. Olney, an early convert to The Church of Jesus Christ of Latter-day Saints, fled to Nauvoo, Illinois, following persecution in Missouri. In Nauvoo, Olney became disgruntled with church leadership and viewed Joseph Smith as a fallen prophet. His writings, consisting of journal entries, letters, and booklets, express his concerns about what he viewed as serious iniquity within the Church. Despite his opposition to church leadership resulting in his excommunication, Olney remained in Nauvoo and wrote about the things he witnessed.

The handwritten papers of Oliver Olney are housed in the Beinecke Rare Book and Manuscript Library at Yale University and are made available in published form for the first time. They offer historical researchers and interested readers of the early Latter-day Saint movement a unique glimpse from the margins of religious society in Nauvoo. Olney's writings add light to key events in early Mormonism such as rumors of polygamy, the influence of Free Masonry in Nauvoo, plans to migrate westward to the Rocky Mountains, as well as growing tensions with disaffected church members and rising conflict with Nauvoo's non-Mormon neighbors.