A Slanting of the Sun: Stories (Paperback) 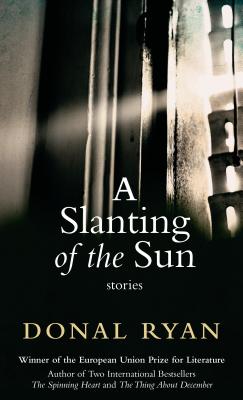 “Exquisite and elegant, Ryan's collection of short stories highlights his talents as a writer of note. Each piece evokes the Irish people -- the spirit, the voice, the culture -- as the characters confront the pain of life. The beauty of the stories comes from the almost musical quality of Ryan's writing. His sentences flow with an ebullient tone that appreciates the good and bad in equal measure, and readers are caught by the lyrical rhythms and inner harmonies, which bring them to a deeper understanding of other people. These stories will make you cry, shake your head in shock, and ponder the great gulfs between men, which are rooted in our own humanity in all its beauty and roughness.”
— Raul Chapa (E), Book People, Austin, TX

Winner of the European Prize for Literature
An Indie Next Selection

Short stories that capture the brutal beauty of the human heart in all its failings, hopes, and quiet triumphs—from one of “the most exciting voices in contemporary Irish fiction” (The Sunday Independent)

Donal Ryan's short stories pick up where his acclaimed novels The Spinning Heart and The Thing About December left off, dealing with dramas set in motion by loneliness and displacement and revealing stories of passion and desire where less astute observers might fail to detect the humanity that roils beneath the surface. Sometimes these dramas are found in ordinary, mundane situations; sometimes they are triggered by a fateful encounter or a tragic decision. At the heart of these stories, crucially, is how people are drawn to each other and cling to love when and where it can be found.

In a number of the these stories, emotional bonds are forged by traumatic events caused by one of the characters—between an old man and the frightened young burglar left to guard him while his brother is beaten; between another young man and the mother of a girl whose death he caused when he crashed his car; between a lonely middle-aged shopkeeper and her assistant. Disconnection and new discoveries pervade stories involving emigration (an Irish priest in war-torn Syria) or immigration (an African refugee in Ireland). Some of the stories are set in the same small town in rural Ireland as the novels, with names that will be familiar to Ryan's readers.

Donal Ryan, from Nenagh in County Tipperary, is a recipient of the 2015 European Union Prize for Literature. His first novel, The Spinning Heart, was published to major acclaim. It won the Guardian First Book Award and the Book of the Year at the Irish Book Awards; it was shortlisted for the International IMPAC Dublin Literary Award; and longlisted for the Man Booker Prize and the Desmond Elliott Prize. His second novel, The Thing About December, was a finalist for the Kerry Group Irish Novel of the Year and Novel of the Year at the Irish Book Awards. Donal lives with his wife Anne Marie and their two children just outside Limerick City.

Winner of the 2015 European Prize for Literature

An October 2015 Indie Next Selection

"Donal Ryan is among the great contemporary chroniclers of grief, loss and bewilderment." — The Independent

"Donal Ryan is a master of the magnetic first line. . . His faithful subject is rural despair; the poetry of adversity, the baffling fortitude of intrinsically decent people. . . Each unit of language has been scrupulously positioned, though the overall effect is of effortlessness. . . This collection shows Ryan adding his own elastic yet distinctive voice to [Irish writer Frank] O’Connor’s impeccable tradition." — The Guardian

"A Slanting of the Sun confirms that Donal Ryan is, without doubt, of the most exciting voices in contemporary Irish fiction." — JP O'Malley in The Sunday Independent

"When Donal Ryan mixes equal parts terror and wistful the results can be mesmerising... Donal Ryan proves himself yet again to be one of the most imaginatively daring writers at work in English today." — RTÉ Ten

"Donal Ryan is a heartbreaker, his quicksilver prose laced with all the wistful rhythms of his Irish forefathers. These breathtaking stories explore human love against an uneasy landscape of violence and desperation." –  Imogen Lycett-Green in The Daily Mail

“As in [Donal Ryan’s] novels, the calibrations of small-town life are forensically observed . . . Ryan’s skill with language flicks out slang and abuse with a masterly touch . . . his ear is sharply attuned and his sense of irony remains mordant.” – Roy Foster in the Irish Times

"One of [Ireland's] most remarkable writers has produced a book of short stories of such visceral power that they hit you in the solar plexus." — Irish Mail on Sunday

"Ryan is already such a master of the short form that even when you dread the outcome, you can't stop reading." — The Irish Independent

"A Slanting of the Sun is bursting with ideas. It reveals a limitless capacity for hope and a writer unlikely to run out of inspiring material." — The Sunday Times

THE THING ABOUT DECEMBER:

"The writing in this novel is simply amazing . . . [it] will at times make readers cry and at others, laugh in delighted recognition." -- Library Journal (Starred Review)

A "short, swift, brutally funny romp through the fallout of a national disaster." -- The Boston Globe