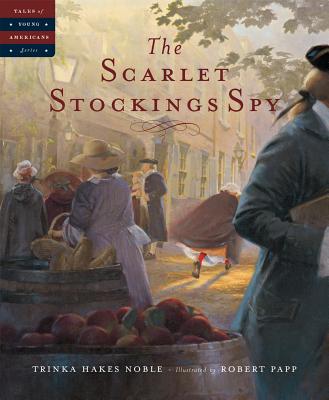 Philadelphia 1777 is no place for the faint of heart. The rumble of war with the British grows louder each day, and spies for and against the Patriots are everywhere. No one is above suspicion. Still, everyday life must go on and young Maddy Rose must help her mother, especially since her father's death at the Battle of Princeton and now with her beloved brother Jonathan off with Washington's army. But when childhood games become life-and-death actions, Maddy Rose is drawn ever deeper into events that will explode beyond her imagining. As young America stands on the very brink of its fight for freedom, it becomes clear that even the smallest of citizens can play the largest of parts, and that the role of a patriot has nothing to do with age and everything to do with heart. In The Scarlet Stockings Spy, Trinka Hakes Noble melds a suspenseful tale of devotion, sacrifice, and patriotism with the stark realities of our country's birth.Noted picture book author and illustrator Trinka Hakes Noble has pursued the study of children's book writing and illustrating in New York City at Parsons School of Design, the New School University, Caldecott medalist Uri Shulevitz's Greenwich Village Workshop, and New York University. She has authored and illustrated numerous books including the popular Jimmy's Boa series, which has been translated into six languages. Trinka lives in Berrnardsville, New Jersey. The Scarlet Stockings Spy is her first book with Sleeping Bear Press. Because Robert Papp's childhood drawings of his favorite superheros were such a pleasure, it was only natural that he would wind up an illustrator. Nowadays, his award-winning artwork appears on book covers and in magazines instead of on the refrigerator. He has produced hundreds of cover illustrations for major publishers across the United States. Robert lives in historic Bucks County, Pennsylvania.