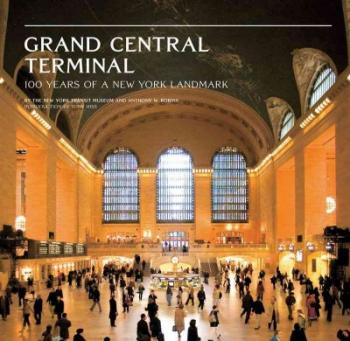 By Anthony W. Robins, NY Transit Museum
$42.00
Unavailable, Out of Stock, or Out of Print


Opened in February 1913, Grand Central Terminal—one of the country’s great architectural monuments—helped create Midtown Manhattan. Over the next century, it evolved into an unofficial town square for New York. Today, it sits astride Park Avenue at 42nd Street in all its original splendor, attracting visitors by the thousands. This new book celebrates Grand Central’s Centennial by tracing the Terminal’s history and design, and showcasing 200 photographs of its wonders—from the well-trodden Main Concourse to its massive power station hidden 10 stories below. The stunning photographs, some archival and some taken by Frank English, official photographer of Metro-North Railroad for more than 25 years, capture every corner of this astonishing complex.

“The book is thoroughly researched and reads like a library of design, lifestyles, art and trivia that even New Yorkers don’t know.” —NY Arts Magazine

Anthony W. Robins, formerly survey director for New York’s Landmarks Commission, has written and lectured about the city’s architecture and history for 30 years. The author of Classics of American Architecture: The World Trade Center and Subway Style, he has written for the New York Times, New York Magazine, and Architectural Record.