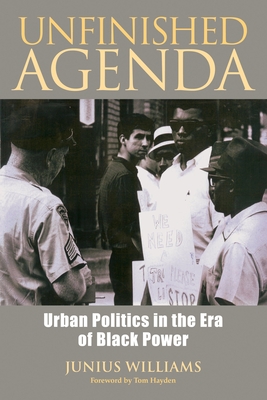 By Junius Williams, Tom Hayden (Foreword by)
$18.95
Unavailable, Out of Stock, or Out of Print

Unfinished Agenda offers an inside look at the Black Power Movement that emerged during the Civil Rights Movement of the sixties. A political memoir that teaches grass-roots politics and inspires organizing for real change in the Age of Obama, this book will appeal to readers of black history, Occupy Wall Street organizers, and armchair political advocates.

Based on notes, interviews, and articles from the 1950s to present day, Junius Williams's inspiring memoir describes his journey from young black boy facing prejudice in the 1950s segregated South to his climb to community and political power as a black lawyer in the 1970s and 80s in Newark, New Jersey. Accompanied by twenty-two compelling photographs highlighting key life events, Unfinished Agenda chronicles the turbulent times during the Civil Rights Movement and Williams's participation every step of the way including his experiences on the front lines of racial riots in Newark and the historic riot in Montgomery, Alabama with Dr. Martin Luther King Jr.

Williams speaks of his many opportunities and experiences--beginning with his education at Amherst College and Yale Law School, his travel to Uganda and Kenya, and working in Harlem. His passion for fighting racism ultimately led him to many years of service in politics in Newark, New Jersey as a community organizer and leader. Williams advocates for renewed community organizing and voting for a progressive party to carry out the "Unfinished Agenda" the Black Power Movement outlined in America during the 60s and early 70s for empowerment of the people.

Listed among Ebony's "100 Most Influential Blacks in America," JUNIUS W. WILLIAMS is a prominent attorney, educator, and advocate who is responsible for developing 2,000 housing units and many community centers in Newark, New Jersey. A graduate of Amherst and Yale, he was elected the youngest President of the National Bar Association in 1978 and is currently Director of the Abbott Leadership Institute at Rutgers University.

"Junius Williams’s memoir provoked a full range of emotions locked in my private vault of memories. His personal journey should be required reading for people who care about their communities and have either a sense of hopelessness or a burning desire to bring about positive change where they live.”
—Dennis W. Archer, mayor of Detroit (1994–2001) and president of the National Bar Association (1983–1984) and the American Bar Association (2003–2004)

“This absolutely riveting story resonates well beyond the emblematic city of Newark, New Jersey. An activist combining ivy-league sophistication and street smarts, Junius Williams helped make the urban North’s civil rights revolution. Although his people’s power inevitably ran up against entrenched institutional power, black as well as white, Williams still inspires and instructs a new generation for whom this should be recommended reading.”
—Nell Irvin Painter, Edwards Professor of American History, Emerita, Princeton University, and author of The History of White People

“Unfinished Agenda is the memoir of a remarkable man’s personal journey through the racial, social, and cultural politics of the last half-century. Junius Williams has spent his life as a changemaker, and his story is certain to inspire activists today and for generations to come.”
—John Schreiber, president and CEO of the New Jersey Performing Arts Center

"Williams is an example of what one leader can do to inspire change in the city. He’s passing his knowledge on to the next generation, to keep the fires of resistance and imagination burning."
—John D. Atlas, NJ.com