A Visionary Madness: The Case of James Tilly Matthews and the Influencing Machine (Paperback) 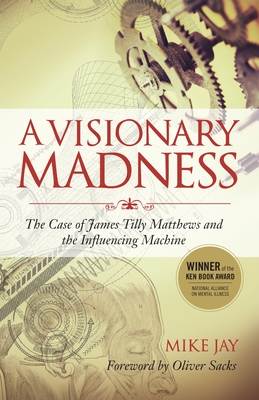 By Mike Jay, Oliver Sacks (Foreword by)
$16.95
Unavailable, Out of Stock, or Out of Print

Confined in Bedlam in 1797 as an incurable lunatic, James Tilly Matthews is one of the most bizarre case studies in the annals of psychiatry. Often cited as the first thorough case study of what we would today call paranoid schizophrenia, Matthews drew intricate diagrams of the "influencing machine" that he believed to be reading and controlling his mind. But his case was even stranger than his doctors realized: many of the incredible conspiracies in which he claimed to be involved were entirely real.

A Visionary Madness traces the story of antiwar advocate James Tilly Matthews through the political and social upheaval of the late eighteenth century, providing a vivid account of the unraveling of Matthews's mind, a snapshot of late eighteenth-century psychiatry, and its relevance to current narratives of madness, conspiracy theories, mind control, and political manipulation. Digging deep into historical records and primary sources, author Mike Jay carefully untangles truth from delusion, providing evidence that Matthews was a political prisoner as much as a madman: he had been working as a double agent in the French Revolution and was privy to political secrets the British government feared he might expose. In the process, Jay illuminates the murky revolutionary politics of the 1790s and situates Matthews' visionary madness within the wider cultural upheavals of a world on the brink of modernity. The details of Matthews' treatment in Bedlam reveals the birth-pangs of early psychiatry and its struggle to free its patients from the harsh regimes of the eighteenth-century madhouse. A fascinating and fast-paced narrative history, A Visionary Madness raises profound questions about the nature of madness and the birth of the modern world.

MIKE JAY is an author, historian, and curator who has written widely on the cultural history of science and medicine. His writing has appeared in the Boston Globe, the Guardian, BBC History Magazine, the Lancet, and Notes and Records of the Royal Society. His most recent book, High Society: Mind-Altering Drugs in History and Culture, accompanied a major exhibition that he curated at Wellcome Collection in London in 2010-11.

From the foreword: "I have never seen the logic of madness, of a particular delusion, presented so clearly and convincingly ... a wonderful book to read, combining exceptional scholarship and psychological insight with deep empathy for the tormented but always gentle and dignified Matthews. And it is beautifully written, with all the drama, the rich characterization, the subtlety, of a fine novel."
—Oliver Sacks, MD, author of Hallucinations

"It's The Manchurian Candidate for the eighteenth century ... an exhilarating cloak-and-dagger narrative. Jay brilliantly evokes the torrid atmosphere of 1790s London and Paris, intertwined with his account of the wondrously strange life and intellect of history's first recognisable case of schizophrenia."
—The Guardian

"Jay deftly places Matthews into the context of a tumultuous era. His madness was a cracked mirror, reflecting crazed shards of mesmerism, galvanism, steam engines, and revolutionary intrigue. But his dilemma remains timeless."
—Village Voice

“Jay has proposed an ambitious, comprehensive, and extremely interesting interpretation of Matthews and his delusion, and of schizophrenia in general … its analysis of mental illness, mad-doctoring and the world of the patient is original and intellectually thrilling. Not least, the narrative is immensely readable.”
—History of Psychiatry

“Brilliant … a salutary lesson for those who would give a voice to the mad, whether mesmerists, psychiatrists, or historians. Such work demands the kind of kind of sympathy and insight that Jay demonstrates in his riveting account.”
—Medical History

“A riveting and affecting tale … Jay sets Matthews’ extraordinary life vividly in its dangerous times and in a final flourish sheers away to other times that have their complement of mind-controlling machines—our own.”
—New Scientist

“Free of academic jargon, delicately nuanced but taut with drama … one of the most rewarding works on madness and its history that I have ever read. Psychiatrists will obviously find much to interest them in this book and they should applaud the balance of its perspective … The book’s greatest triumph, however, lies in its seamless fusion of biography, history, and cultural criticism. Whilst telling us Matthews’ fascinating story, Jay also shows us how his life was shaped by the turbulence of the age and how the dilemmas he faced prefigured some of our own.”
—Literary Review

“Gripping as well as profound … Jay’s narrative is structured for maximum effect, and themes woven in strand by strand until they run into a multi-coloured fabric.”
—The Independent

“Beautifully balanced and fiercely energetic … an important contribution to the historical debate, a paean to the logic of lunacy and a promise that, at least for now, remote mind-control is probably no more than a fiction. Probably.”
—The Spectator