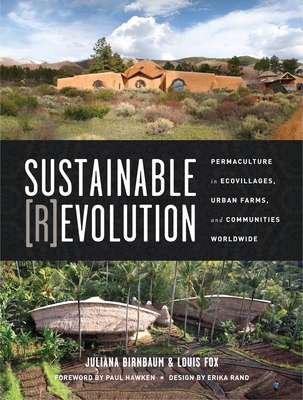 By Juliana Birnbaum (Editor), Louis Fox (Editor), Paul Hawken (Foreword by), Erika Rand (Designed by)
This Book Is Not Sold Online - Inquire In Store
Not In Stock/Special Order

Urban gardeners. Native seed-saving collectives. Ecovillage developments. What is the connection between these seemingly disparate groups? The ecological design system of permaculture is the common thread that weaves them into a powerful, potentially revolutionary—or reevolutionary—movement.

Permaculture is a philosophy based on common ethics of sustainable cultures throughout history that have designed settlements according to nature's patterns and lived within its bounds. As a movement that has been building momentum for the past 40 years, it now is taking form as a growing network of sites developed with the intention of regenerating local ecologies and economies. Permaculture strategies can be used by individuals, groups, or nations to address basic human needs such as food, water, energy, and housing. As a species, humans are being called forth to evolve, using our collective intelligence to meet the challenges of the future. Yet if we are to survive our collective planetary crisis, we need to revisit history, integrating successful systems from sustainable cultures. To boldly confront our position on the brink of the earth's carrying capacity and make changes that incorporate the wisdom of the past is truly revolutionary.

Sustainable Revolution features the work of a worldwide network of visionaries, including journalists, activists, indigenous leaders and permaculturists such as David Holmgren, Vandana Shiva, Charles Eisenstein, Starhawk, Erik Assadourian, Victoria Tauli-Corpuz, Albert Bates, and Geoff Lawton. This beautifully photographed collection of profiles, interviews, and essays features 60 innovative community-based projects in diverse climates across the planet. Edited by anthropologist Juliana Birnbaum Fox and award-winning activist filmmaker Louis Fox, it can be read as an informal ethnography of an international culture that is modeling solutions on the cutting edge of social and environmental change. The research presented in the book frames the permaculture movement as a  significant ally to marginalized groups, such as the urban poor and native communities resisting the pressures of globalization. Sustainable Revolution uplifts and inspires with its amazing array of dynamic activists and thriving, vibrant communities.

Trained as a cultural anthropologist and skilled in four languages, Juliana Birnbaum has lived and worked in the U.S., Europe, Japan, Nepal, Costa Rica and Brazil. In 2005 she founded Voices in Solidarity, an initiative that partnered with Ashaninka indigenous tribal leaders from the Brazilian Amazon to support the development of the Yorenka Ãtame community-led environmental educational center featured in the book. She has written about ecovillages, native rights, and social justice issues in a variety of newspapers, indigenous journals, and anthologies including E-The Environmental Magazine, Bridges Journal, El Reportero, The Rising Nepal, World Rainforest Movement Bulletin, Quechua Network, and Cultural Survival Quarterly. She was the first graduate of the Cornerstone Doula School, one of the most rigorous natural birth programs in the U.S., focusing on a holistic model of care. She is engaged variously as writer, editor, teacher, midwife assistant and mother when not attempting new yoga poses or learning how to garden.

Louis Fox is a storyteller, strategist, photographer, puppeteer, and filmmaker dedicated to looking at the world as it truly is, while also envisioning it as it could be. Since cofounding Free Range Studios in 1999, he’s created some of the most successful online cause-marketing campaigns of all time. His work for clients like Amnesty International, the Organic Trade Association, Patagonia, and Greenpeace has been featured in the New York Times, USA Today, The Washington Post, CNN, FOX News, NPR, Smithsonian Cooper-Hewitt Design Museum, The Colbert Report, and Fast Company magazine, which named him one of the fifty most influential social innovators of 2007. As a filmmaker, he has directed and cowritten over a hundred short live action and animated films. His projects The Meatrix, Grocery Store Wars, and the on-going Story of Stuff series, have been viewed by more than 60 million people and have garnered top honors at dozens of international film and media festivals.

Juliana Birnbaum, Louis Fox, and their daughters Lîla and Serenne live in California’s San Geronimo Valley and are founding members of a collective permaculture farm in Costa Rica.

“The most significant discovery of the space age is that we humans are, first and foremost, indigenous Earthlings. Sustainable Revolution is a profound reminder of what this means.… By detailing local applications of eternally regenerative design principles, it eloquently demonstrates the inspiring possibilities—and critical importance—of synchronizing with the highly evolved patterns emerging from our home planet’s cycles of life.”—David McConville, chairman of the Buckminster Fuller Institute

“In today's sped-up, hyper-individualized, consumer-frenzied society, it's hard not to feel off-kilter. Birnbaum and Fox's book is the perfect medicine for the moment, offering guidance and inspiration to reclaim and repair our relationship with ourselves, our community and the planet.”—Annie Leonard, founder of the Story of Stuff Project

“Our culture has been at war with the world for millennia, wresting our food from it as if it were an enemy to be conquered.… Permaculture isn't just another way of growing food, it's a culture different from ours, a culture making peace with the world in every way. See it at work in this book. You’ll be astonished. I was.”—Daniel Quinn, author of Ishmael