Karlstadt's Battle with Luther: Documents in a Liberal-Radical Debate (Paperback) 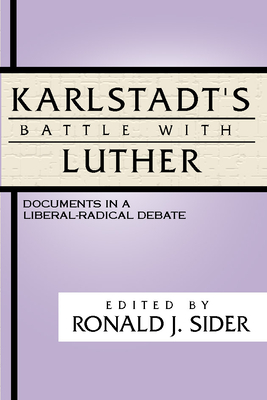 Sure to be considered a milestone in Reformation studies, this book makes available for the first time in English select treatises of well-known attacks and rejoinders of Karlstadt and Luther. One chapter even provides a fascinating eyewitness-account of their bitter confrontation at Jena. The juxtaposition of their sharply articulated positions, here amply cross-referenced, helps to focus not only on the points of divergence but also on the common commitments of these sixteenth-century Reformers. The editor's introductory material effectively places the conflict in historical and theological perspective. In an interpretive essay Dr. Sider contends that the violent quarrel between the two former colleagues was due not so much to theological disagreement as to differences over strategy and timing, their celebrated battle being but one instance of an ongoing liberal-radical debate, waged even in our own time. Sider's vigorous translations and provocative interpretations make the book invaluable as a primary source book as well as for its original analysis.

Ronald J. Sider is Professor of Theology, Holistic Ministry & Public Policy at Palmer Theological Seminary, and President of Evangelicals for Social Action. He is the author of over 30 books including Rich Christians in an Age of Hunger (Intervarsity & Paulist, 1977), The Scandal of the Evangelical Conscience (Baker, 2005), Christ and Violence (Wipf & Stock, reprinted 2001), Saving Souls, Serving Society (Oxford, 2005), and I Am not a Social Activist (Herald Press, 2008)