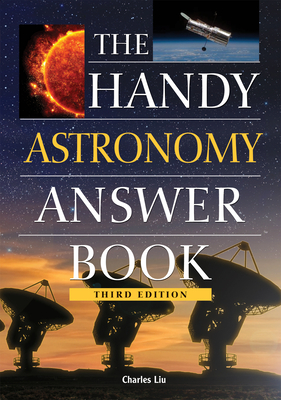 From planetary movements and the exploration of our solar system to black holes and dark matter, this comprehensive reference simplifies all aspects of astronomy with an approachable question-and-answer format. With chapters broken into various astronomical studiesincluding the universe, galaxies, planets, and space explorationthis fully updated resource is an ideal companion for students, teachers, and amateur astronomers, answering more than 1,00 questions, such as Is the universe infinite? What would happen to you if you fell onto a black hole? What are the basic concepts of Einstein's special theory of relativity? and Who was the first person in space?"

Charles Liu is a professor of astrophysics at the City University of New York's College of Staten Island and an associate with the Hayden Planetarium and Department of Astrophysics at the American Museum of Natural History. His research focuses on colliding galaxies, starburst galaxies, quasars, and the star formation history of the universe. In addition to his research publications, Liu also writes for students and general audiences; including Visible Ink Press' popular The Handy Astronomy Answer Book and The Handy Physics Answer Book, as well as StarTalk with Neil DeGrasse Tyson and Jeffery Lee Simons. For his work with students, he has received the American Institute of Physics Science Writing Award and the Award for Popular Writing on Solar Physics from the American Astronomical Society. Until recently, he served as Education Officer and Trustee of the American Astronomical Society, and he currently serves as president of the Astronomical Society of New York. He earned degrees in astronomy, astrophysics, and physics from Harvard and the University of Arizona, and he held postdoctoral positions at Kitt Peak National Observatory and at Columbia University. He and his wife have a daughter and two sons.