Atra-Hasis: The Babylonian Story of the Flood, with the Sumerian Flood Story (Paperback) 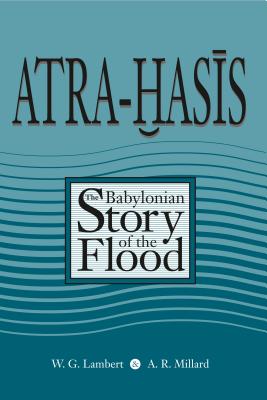 The Babylonian flood story of Atra-hasis is of vital importance to ancient Near Eastern and biblical scholars, as well as students of history, anthropology, and comparative religion. Professors Lambert and Millard provide the reader with a detailed introduction, transliterated Akkadian with English translation, critical notes, and line drawings of the cuneiform tablets.

The epic opens in a time when only the gods lived in the universe. Having decided on their established spheres of influence, the chief Mesopotamian gods--Anu, Enlil, and Enki--began their divine labors. In a joint effort, Enki and Mami (the mother goddess) engineered the creation of mankind from clay and the flesh and blood of a slain god. The remainder of the story recounts the expansion of humanity, the consequent irritation of Enki by this expansion, the attempt by Enki and Enlil to destroy humankind through a great flood, and the escape from the flood by Atra-hasis in a boat, accompanied by his possessions, family, and animals.

This classic scholarly edition of the epic is once again made available as a quality Eisenbrauns reprint.