The Spirit of Laws (Great Books in Philosophy) (Paperback) 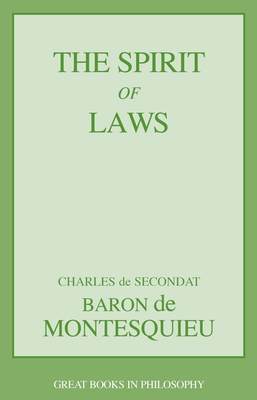 The Spirit of Laws is one of the most influential books of all time. This masterpiece of political philosophy was widely read throughout Europe, attracted an especially enthusiastic readership in England, and had a profound effect on the framers of the American Constitution.

Montesquieu (1689-1755), already famous and controversial through his Persian Letters, a work of his youth in which he humorously satirized the foibles of French society, turned in his later years to this serious treatise on the nature of law. But though the subject itself was profound, this gravitas did not inhibit the famous Montesquieu wit. Master of the pithy bon mot, he managed to survey a great deal of political and philosophical territory while keeping his readers charmed with memorable and artfully turned phrases. "Liberty," he says, "consists in the ability to do what one ought to desire and in not being forced to do what one ought not to desire." Concerning the unpopularity of the English in France, he says it is due to their arrogance, which is such that even in peace "they seem to negotiate with none but enemies."

The scope of this masterful work is truly prodigious. Montesquieu explores the essentials of good government; compares and contrasts despotism, monarchy, and democracy; and discusses the factors that lead to corruption of governments. Among the many other topics considered are education of the citizenry, crime and punishment, abuse of power and of liberty, individual rights, taxation, slavery, the role of women, the influence of climate on the temper of a people and their form of government, commerce, religion, and a host of additional subjects.

The Spirit of Laws is essential and genuinely enjoyable reading for anyone interested in the development of democracy.

CHARLES-LOUIS DE SECONDAT, the jurist and political philosopher, was born at the Château de La Brede, near Bordeaux, France, on January 18, 1689. He attended the Oratorian College of Juilly and then studied law in Bordeaux from 1705 to 1708. Upon his father's death in 1713, he assumed the title of baron de La Brede and was appointed counselor of the Bordeaux parliament (1714). In 1716 he inherited his uncle's title of baron de Montesquieu, and also his office, serving as the deputy president of the parliament from 1716 to 1726.

Because of the success of Persian Letters, in 1728 Montesquieu was elected to the French Academy, the French lit­erary academy established by Cardinal de Richelieu in 1634 to maintain standards of literary taste and to establish the lit­erary language. That same year, seeking to complete his education by foreign travel, he set out on a grand tour of Europe, particularly England, where he remained from 1729 to 1731.

In 1734 Montesquieu published Considerations sur les causes de la grandeur et de la decadence des Romains (Thoughts on the Causes of the Greatness and the Downfall of the Romans), one of the first important works in the philos­ophy of history.

Montesquieu's greatest work, De l'esprit des lois (The Spirit of Laws), was published in 1748. It is a comparative study of three types of government: republic, monarchy, and despotism. Montesquieu held that governmental powers should be separated and balanced to guarantee individual rights and freedom. Attacked by the French clergy and his enemies at the Sorbonne, Montesquieu responded with Défense de "l'esprit des lois" (Defense of "The Spirit of Laws") in 1750. His last work, Essai sur le gout (Essay on Taste) was not completed.