The Life of Reason (Great Books in Philosophy) (Paperback) 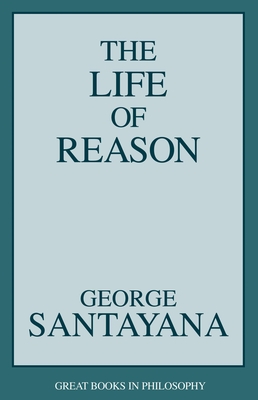 Comparing the lived world with the ideal world, noted American philosophical naturalist, poet, and literary critic George Santayana (1863-1952) seeks in this influential compilation of his earlier works to outline the ancient ideal of a well-ordered life, one in which reason is the organizing force that recognizes the need to allocate science, religion, art, social concerns, and practical wisdom their proper role and appropriate emphasis within the fully developed human experience.

GEORGE SANTAYANA was born in Madrid, Spain, on December 16, 1863. When his parents were separated nine years later, in 1872, his mother took him to Boston, Massachusetts, where he attended the prestigious Boston Latin School and Harvard Col­lege. Upon graduation from Harvard in 1886, Santayana spent two years studying in Berlin, but he returned to the United States to pursue a doctorate in philosophy at Harvard, where he studied under William James. After earning his degree, Santayana joined the university faculty.

In 1912, however, the philosopher received a legacy from his mother's estate which allowed him to retire from teaching. He traveled to Europe, spending time first in England and Paris and later settling in Rome. He remained there until his death on September 26, 1952.

A poet and literary critic as well as a philosopher, Santayana made significant contributions to aesthetics, primarily through the publication of his earliest major work in this area, The Sense of Beauty (1896), which focuses on the imaginative life of humanity rather than on the underlying structures of reality or on humankind's methods of grasping reality. This theme is continued and expanded upon in Santayana's most famous work, The Life of Reason (5 vols., 1905-1906). Santayana retained a naturalistic approach in. all his writing, hold­ing that everything ideal has a natural basis and that everything natural has an ideal development.