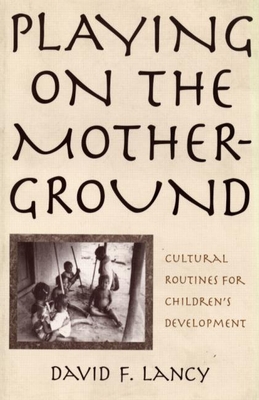 Theorists of child development, for the most part, have taken white, middle class, Euro-American children as the norm. These "typical" children, however, are exposed to two major enculturating influences that are by no means common across cultures: formal schooling and parents who consciously attempt to serve as teachers at home. Providing an important contribution toward a more universal understanding of child development, this book concentrates on children of the Kpelle-speaking people of West Africa, who grow up neither spending thousands of hours in quiet study nor receiving a heavy dose of parent tutelage. Acknowledging the centrality of play in children's lives, the Kpelle expect their children to play "on the mother ground," or open spaces adjacent to the areas where adults are likely to be working. Here, children observe the work that adults do as they engage in voluntary activities or "routines" that serve a clear enculturating function. With photographs and vivid first-hand description, the author demonstrates the impact of games, folklore, and other routines on early development among the Kpelle and in other non-Western cultures. He persuasively argues that such enduring routines for raising children as those observed in the Kpelle village are universal and not limited to rural societies, though they take a variety of forms depending on the society. Ethnographically rich and theoretically sophisticated, the book provides a sound empirical foundation for a practice-based theory of child development.

David F. Lancy, Ph.D., has held academic appointments in psychology and education, and is now Professor of Anthropology at Utah State University. His fieldwork in Liberia was followed by work in Papua New Guinea and, more recently, Sweden. Dr. Lancy's current research focuses on the cultural foundations of literacy.

"This is an important study of childhood development in an African society, based upon extensive field research. Particularly valuable is the discussion of the role of games in childhood development, and of how children learn the major economic skills of adulthood. The elements of the transition from play to work form an interesting and significant contribution to the study of African childhood education. The relative roles of informal learning, apprenticeship and bush initiation in learning are analyzed with unusual care." --Simon Ottenberg, PhD, Emeritus Professor, University of Washington

"One of the important contributions that anthropologists can make to the field of child development and socialization research is to provide researchers with 'thick descriptions' (Geertz 1973) of children's routine social interactions in various cultural contexts. Play is an important activity for children but the child development and socialization literature is short on carefully researched 'ethnographies of play.' David Lancy's Playing on the Mother Ground is exactly the type of ethnography that this field needs--it is ethnographically rich and theoretically sophisticated. I was most impressed with the approach Lancy develops for examining how cultural routines shape children's socialization experiences." --Helen B. Schwartzman, Ph.D., Dept of Anthropology, Northwestern University