The PK Man: A True Story of Mind Over Matter (Paperback) 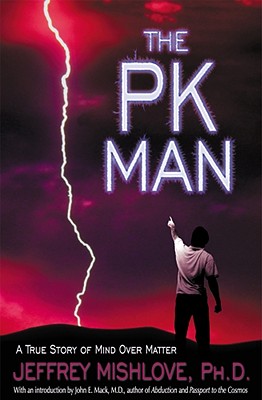 So begins Jeffrey Mishlove's The PK Man, the true and strange story of Ted Owens, whose claims of powerful psychokinetic abilities given to him by "Space Intelligences" were too bizarre and extreme for many to believe. When these claims were ignored or challenged, he purportedly used his powers to produce earthquakes, civil unrest, UFO sightings, strange weather events, and other powerful phenomena. Owens even threatened to down aircraft to garner attention.

Was there any truth to Owens' abilities, or was he a fraud with a knack for picking the times and places of catastrophes? Jeffrey Mishlove, PhD, a respected parapsychologist and host of the popular public television program Thinking Allowed, analyzes correspondence, interviews, newspaper reports, and remarkable life of "the world's greatest psychic," as Owens claimed to be. Whether Owens was a prodigious liar and dangerous con-man, or a true but unbalanced master who used his incredible powers primarily for petty acts of revenge, many questions remain, and the implications for the rest of us are staggering.