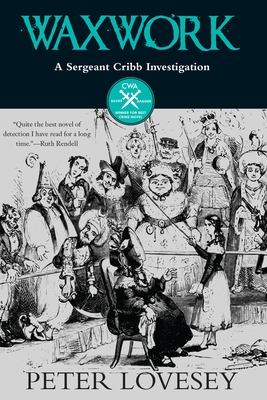 This is book number 8 in the A Sergeant Cribb Investigation series.

“At once charming, chilling and convincing as if it had unfolded in the Police Intelligence column of April, 1888.” —TIME

London, 1888. Though the beautiful Miriam Cromer has confessed to the murder of her husband’s assistant, she is still confident of her acquittal. But then she is sentenced to hang. She blames her husband, but he has an alibi. Sergeant Cribb and Constable Thackeray must discover what really happened at Park Lodge on 12th March, 1888, and quickly.

Winner of the CWA Silver Dagger for Best Crime Novel

“At once charming, chilling and convincing as if it had unfolded in the Police Intelligence column of April, 1888.”
—TIME

“As good a crime entertainment as you could wish for.”
—The Times

“I couldn’t put it down. I read it at a sitting—or rather, a lying, for I was in the garden at the time and got so absorbed I didn’t notice the sun had burnt the skin off my back! Waxwork is quite the best novel of detection I have read for a long time.”
—Ruth Rendell