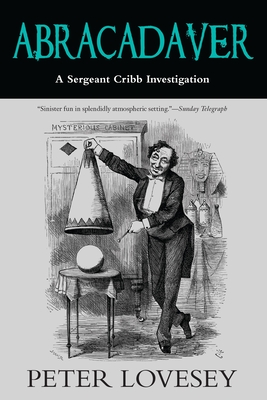 This is book number 3 in the A Sergeant Cribb Investigation series.

A sadistic practical joker is haunting the popular music halls of London, interfering with the actors and interrupting their acts by orchestrating humiliating disasters that take place in view of the audience. A trapeze artist misses her timing when the trapeze ropes are shortened. A comedian who invites the audience to sing along with him finds the words of his song “shamefully” altered. Mustard has been applied to a sword swallower’s blade. A singer’s costume has been rigged. The girl in a magician’s box is trapped. Then the mischief escalates to murder. Or was murder intended all along? That indomitable detective team, Sergeant Cribb and Constable Thackeray of Scotland Yard, must track down the elusive criminal.

“Another of those delightful Victorian mysteries, featuring Sergeant Cribb and Constable Thackeray of the Yard. This one deals with peculiar accidents in various music halls, mishaps of a kind that would ruin a performer’s career; and then there’s murder . . . Fine picture of period vice, good mystery plotting, and fun.”
—San Francisco Chronicle

“It’s a tangled business, both evil and intricate. Every police move seems frustrated by almost superhuman cunning until Cribb’s trap nails the murderer and ends a hunt as spectacular as it has been fairly marked with clues. Very much Grade A.”
—John Dickson Carr, Ellery Queen’s Mystery Magazine