Godine at Fifty: A Retrospective of Five Decades in the Life of an Independent Publisher (Hardcover) 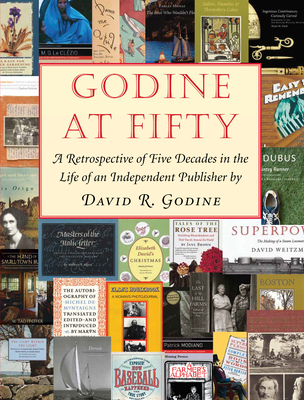 "The story of a book-making life."--New York Times

"The lovely colors, tasteful art and elegant typography are an abiding reminder to a hurried world that some gifts of grace endure. That promise is realized in Godine's books, the gold standard of commercial bookmaking."--Wall Street Journal
David R. Godine, the retired founder of the press, conducts a personal tour of the most memorable books he published during his 50-year career. From his earliest days as a letterpress printer to the present digital era, Godine managed to survive, and sporadically thrive, against all odds and challenges.
For more than fifty years, this publishing house tried to make good on the founder's claim to "Publish books that matter for people who care." Books that might, and often did, make a difference. In fiction and nonfiction, biography, photography, art and architecture, the graphic arts, children's books, and more, the company maintained an open door policy, attempting to discover and nurture new talent, rediscovering and reprinting older and unjustly neglected classics. Its program includes first American editions of such acclaimed authors as John Banville, Richard Rodriguez, Noel Perrin, Andre Dubus, Janet Malcolm, and Georges Perec. Its photographers have included Sally Mann, Paul Caponigro, Yousuf Karsh, Nicholas Nixon, George Tice, Rosamond Purcell, Manuel lvarez Bravo, and Julia Margaret Cameron, among others. Its list of children's books, with authors and illustrators as diverse as Mary Azarian, Dylan Thomas, Barbara McClintock, Andrea Wisnewski, Edward Ardizzone, William Steig, Daniel C. Beard, Saki, and Frances Hodgson Burnett, have been embraced by reviewers, bookstores, and the public for two generations. Among many others, the Nonpareil list has reprinted the work of Edmund Wilson, George Orwell, Donald Hall,
Iris Origo, Paul Horgan, William Gass, Will Cuppy, Ludwig Bemelmans, William Maxwell, Wright Morris, and Paula Fox. The Verba Mundi series introduced American readers to classics of foreign literature by Aharon Appelfeld, Dino Buzzati, Robert Musil, Jos Donoso, and two Nobel Laureates, J.M.G. Le Cl zio and Patrick Modiano. As publishing history, Godine at Fifty presents a record of an era that began in 1970 as the reign of hot metal type that had endured for almost 500 years was coming to an end, when retailers were mostly brick-and-mortar stores, when small publishers thrived, when library purchases were primarily books, and when correspondence was carried on through letters and the telephone. It was an industry that had not substantially changed for a century. So this is, as well, the story of a sea change--in publishing practices, in technology, in retailing, and in corporate structures. Divided into twenty-four chapters and describing almost 300 titles, it remains primarily a personal story--the record, told through the books themselves, of a staunchly independent publisher who pursued his own interests, expanded on his own passions, and took the unconventional position that somewhere out there were probably enough readers that shared his peculiar obsessions to insure his survival. It is also the back story of books and authors, some famous, some little known, who had a story to tell, and what was required to bring that story, through the many and complex dimensions of the publishing process, to the attention of the world.