Faces in the Crowd (Paperback) 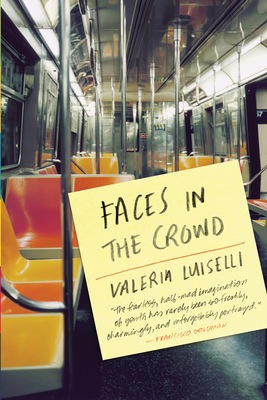 In part a portrait of the artist as a young woman, this deceptively modest-seeming, astonishingly inventive novel creates an extraordinary intimacy, a sensibility so alive it quietly takes over all your senses, quivering through your nerve endings, opening your eyes and heart. Youth, from unruly student years to early motherhood and a loving marriage--and then, in the book's second half, wilder and something else altogether, the fearless, half-mad imagination of youth, I might as well call it--has rarely been so freshly, charmingly, and unforgettably portrayed. Valeria Luiselli is a masterful, entirely original writer.--Francisco Goldman

In Mexico City, a young mother is writing a novel of her days as a translator living in New York. In Harlem, a translator is desperate to publish the works of Gilberto Owen, an obscure Mexican poet. And in Philadelphia, Gilberto Owen recalls his friendship with Lorca, and the young woman he saw in the windows of passing trains. Valeria Luiselli's debut signals the arrival of a major international writer and an unexpected and necessary voice in contemporary fiction.
Luiselli's haunting debut novel, about a young mother living in Mexico City who writes a novel looking back on her time spent working as a translator of obscure works at a small independent press in Harlem, erodes the concrete borders of everyday life with a beautiful, melancholy contemplation of disappearance. . . . Luiselli plays with the idea of time and identity with grace and intuition. --Publishers Weekly

Valeria Luiselli was born in Mexico City in 1983 and grew up in South Africa. Her novel and essays have been translated into many languages and her work has appeared in publications including The New York Times, Granta, and McSweeney's. Some of her recent projects include a ballet libretto for the choreographer Christopher Wheeldon, performed by the New York City Ballet in Lincoln Center in 2010; a pedestrian sound installation for the Serpentine Gallery in London; and a novella in installments for workers in a juice factory in Mexico. She lives in New York City.