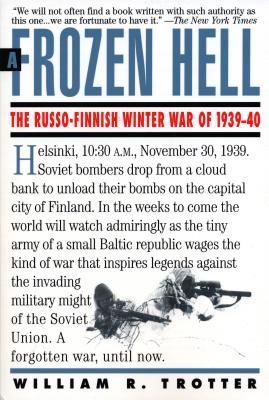 In 1939, tiny Finland waged war-the kind of war that spawns legends-against the mighty Soviet Union, and yet their epic struggle has been largely ignored. Guerrillas on skis, heroic single-handed attacks on tanks, unfathomable endurance, and the charismatic leadership of one of this century's true military geniuses-these are the elements of both the Finnish victory and a gripping tale of war.

William R. Trotter was raised in Charlotte, North Carolina, and educated at Davidson College, where he earned a B.A. in European History. He has worked as a regional music critic, a book reviewer, and a freelance historian and feature writer. Trotter has published twelve books as well as many articles--in The Independent (North Carolina), Spectator Magazine, the American Record Magazine, Film Culture, Military History Monthly, and dozens of other magazines. Since 1987, he has been a senior writer for PC Gamer Magazine. In 1995, Trotter won the Finlandia Foundation's Arts and Letters Prize for A Frozen Hell, and the book is required reading for the 2nd Marine Division. In addition, his biography of Mitropoulos, Priest of Music: The Life and Times of Dimitri Mitropoulos, was selected as one of the "ten best 'arts' books of the year" by National Public Radio, and one of his novellas has been nominated for a Bram Stoker Award. William Trotter lives with his wife and their youngest son in Greensboro, North Carolina.