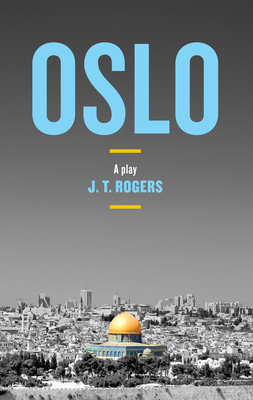 Winner of the 2017 Tony Award for Best Play Winner of the 2017 Lucille Lortel Award for Outstanding Play Winner of the 2017 New York Drama Critics Circle Award for Best Play "Oslo is a wonderful and moving work that portrays how real diplomacy works. The play shows us what can happen when men and women on opposite sides of what is perceived as an intractable divide strive to create a shared humanity." - Ban Ki-moon, former Secretary-General of the United Nations "A disarmingly funny masterpiece." - Huffington Post "So human and so funny. Oslo is gripping, compelling, and compulsively watchable. This is what we call drama, and it's what we live for. So, go, already--live " - Variety "The stuff of crackling theater...Oslo is a vivid, thoughtful, and astonishingly lucid account of a byzantine chapter in international politics." - New York Times "Big-boned and gripping." - New York Magazine "A riveting political thriller." - Associated Press "Exhilarating theatrical magic...Oslo makes high drama out of a complex set of negotiations that in any less wizardly hands would be a shallow biopic." - John Guare, Tony Award-winning author of Six Degrees of Separation and The House of Blue Leaves A darkly funny and sweeping new play, Oslo tells the surprising true story of the back-channel talks, unlikely friendships, and quiet heroics that led to the 1993 Oslo Accords between the Israelis and the Palestinians. As he did with such wit and intelligence in Blood and Gifts, J.T. Rogers presents a deeply personal story set against a complex political canvas. Rogers's other plays include The Overwhelming, White People, Madagascar, and he is a co-author of The Great Game: Afghanistan.

J.T. Rogers' plays include Blood and Gifts, The Overwhelming, White People, and Madagascar. He was nominated for a 2009 Olivier Award for his work as one of the original playwrights for The Great Game: Afghanistan. He is a 2012 Guggenheim fellow in playwriting. Other recent awards include NEA/TCG and NYFA fellowships, the Pinter Review Prize for Drama, the American Theatre Critics Association's Osborne Award, and the William Inge Center for the Arts' New Voices Award.