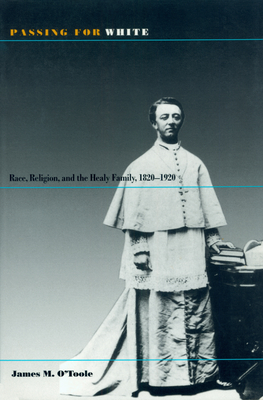 Through the prism of one family's experience, this book explores questions of racial identity, religious tolerance, and black-white "passing" in America. Spanning the century from 1820 to 1920, it tells the story of Michael Morris Healy, a white Irish immigrant planter in Georgia; his African American slave Eliza Clark Healy, who was also his wife; and their nine children. Legally slaves, these brothers and sisters were smuggled north before the Civil War to be educated. In spite of the hardships imposed by American society on persons of mixed racial heritage, the Healy children achieved considerable success. Rejecting the convention that defined as black anyone with "one drop of Negro blood," they were able to transform themselves into white Americans. Their unlikely ally in this transition was the Catholic church, as several of them became priests or nuns. One brother served as a bishop in Maine, another as rector of the Cathedral in Boston, and a third as president of Georgetown University. Of the two sisters who became nuns, one was appointed the superior of convents in the United States and Canada. Another brother served for twenty years as a captain in the U.S. Coast Guard, enforcing law and order in the waters off Alaska. The Healy children's transition from black to white should not have been possible according to the prevailing understandings of race, but they accomplished it with apparent ease. Relying on their abilities, and in most cases choosing celibacy, which precluded mixed-race offspring, they forged a place for themselves. They also benefited from the support of people in the church and elsewhere. Even those white Americans who knew the family's background chose to overlook their African ancestry and thereby help them to "get away" with passing. By exploring the lifelong struggles of the members of the Healy family to redefine themselves in a racially polarized society, this book makes a distinctive contribution to our understanding of the enduring dilemma of race in America.

James M. O'Toole is associate professor of history at Boston College and author of Militant and Triumphant: William Henry O'Connell and the Catholic Church in Boston, 1895–1944.

"O'Toole tells the remarkably well documented story of an American family negotiating the terrain of race and ethnicity in the nineteenth century. Working at the intersection of church history and racial and ethnic history, he demonstrates that racial categories have been more fluid than law and custom admit. The Healys found freedom and extraordinary achievement by embracing their Irish heritage and the Catholic faith, while distancing themselves from their African roots and slave status. This important book presents a more complex American racial past and contributes to our understanding of the challenges of a multiracial future."—Lois E. Horton and James Oliver Horton, authors of

In Hope of Liberty and Black Bostonians

"This is a remarkably interesting story. The research is very impressive in both thoroughness and scope. . . . I know of no book that is anywhere near as complete in its extraordinary story of an entire family in the United States when the nation was so heavily, both historically and fundamentally, a bi-rather than multiple- 'racial' society."—Winthrop D. Jordan, author of White over Black:

"This book is enormously informative on the subject of race and religion in the nineteenth century, beautifully told, and superbly researched. . . . Upon its publication it will be one of the best books we have on nineteenth-century Catholic history, and an important study for the rapidly growing field of 'racial' identity."—John T. McGreevy, author of Parish Boundaries: The Catholic

Encounter with Race in the Twentieth-Century Urban North

"The story is the thing. And it is a great story."—Cleveland Call and Post