Border of a Dream: Selected Poems of Antonio Machado (Paperback) 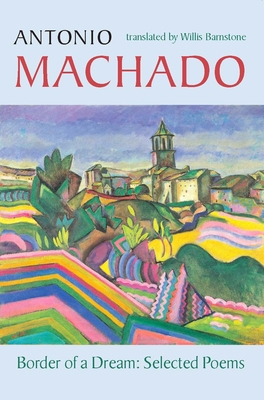 By Antonio Machado, Willis Barnstone (Translator)
$22.00
Unavailable, Out of Stock, or Out of Print

Antonio Machado (1875-1939) is Spain's master poet, the explorer of dream and landscape, and of consciousness below language. Widely regarded as the greatest twentieth century poet who wrote in Spanish, Machado--like his contemporary Rilke--is intensely introspective and meditative. In this collection, the unparalleled translator Willis Barnstone, returns to the poet with whom he first started his distinguished career, offering a new bilingual edition which provides a sweeping assessment of Machado's work. In addition, Border of a Dream includes a reminiscence by Nobel Laureate Juan Ram n Jim nez and a foreword by John Dos Passos.

from Proverbs and Songs

Absolute faith. We neither are nor will be.
Our whole life is borrowed
We brought nothing. With nothing we leave.
*
You say nothing is created?
Don't worry. With clay
of the earth make a cup
so your brother can drink.

Born near Seville, Spain, Antonio Machado turned to a career in writing and translating in order to help support his family after the death of his father in 1893. His growing reputation as a poet led to teaching posts in various cities in Spain and, eventually, he returned to finish his degree from the University of Madrid in 1918. He remained in Madrid after the outbreak of civil war, committed to the Republican cause, but the violence finally forced him to flee. He died an exile in France.

Willis Barnstone is one of America's foremost translator-poets, bringing into English an extraordinary range of work, from Mao Tse-tung to the New Testament.