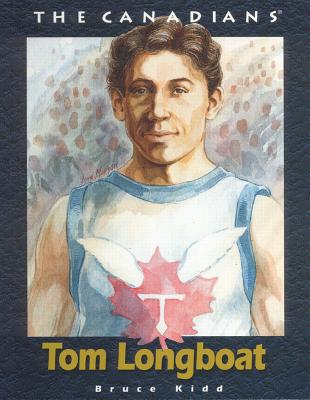 By Bruce Kidd
$6.95
Unavailable, Out of Stock, or Out of Print

From the rural back roads near his home on the Six Nations Reserve to the track of a crowd-packed Madison Square Garden, Tom Longboat raced his way to fame as the greatest distance runner Canada has even known. The tall Onondaga athlete captured the hearts of racing fans everywhere during the early years of the twentieth century. He was a courageous competitor and served his country during World War I as a dispatch runner, taking messages from post to post under difficult and dangerous conditions.

Longboat's amazing career as world champion long-distance runner included spectacular races in Canada, the 1907 Boston Marathon, the 1908 Olympic Marathon, and many one-on-one races with the world's top professional runners. Thousands would gather to watch the famous Canadian shatter records. Yet for all his fame and excellence, Tom Longboat had to struggle against the vicious racism of his age.

In his biography of Longboat, long-distance runner Bruce Kidd gives an insider's view of the life of a great athlete in the context of Canadian social history.

Bruce Kidd is a Fitzhenry and Whiteside author.