Views of the Salish Sea: One Hundred and Fifty Years of Change around the Strait of Georgia (Hardcover) 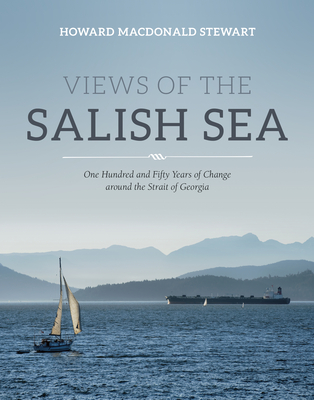 It is not mere coincidence that two-thirds of the population of British Columbia occupies lands bordering its great inland sea, the Strait of Georgia, and connected waterways collectively known as the North Salish Sea. Averaging forty kilometres in width and stretching some three hundred kilometres from Vancouver and Victoria in the south to Powell River and Campbell River in the north, the North Salish Sea has long sheltered a bounty of habitable lands and rich maritime resources ideal for human settlement. While the region's intricate shoreline of peninsulas, promontories, estuaries and plains has been occupied by human communities for millennia, the last century and a half has been an unprecedented age of rapid colonization, industrialization and globalization. Many books have been written about individual communities and industries around the great waterway, but none have examined the region as a geographical unit with its own dynamic systems, which can best be understood as an interrelated whole.

The Strait of Georgia has influenced human affairs, even as people have changed the Strait, in a complex relationship that continues today. British colonization and the commodification of the Strait's resources launched a resource rush around the sea that began in earnest in the decades before the First World War, often at the expense of Indigenous populations. Coal mining developed earliest and grew rapidly. Fishing, lumbering and metal mining were also established by the 1880s and soon experienced exponential growth. From the earliest salmon canneries to today's cruise ship industry, all have depended on the Strait to ensure economic prosperity and the easy movement of people and goods.

As competition for space and resources increases, and as the effects of climate change are amplified, the pressure on this ecologically vulnerable area will only intensify. If this precious sea is to be passed to future generations with any semblance of its inherent richness and diversity intact, then it will need to be effectively managed and vigorously defended. The first step is to understand the complex story of the region, making this essential reading not only for history buffs but anyone with an interest in the future of British Columbia.

Howard Macdonald Stewart was born and raised on the shores of the North Salish Sea and has worked for the United Nations, local and national governments, international agencies, communities, NGOs and industries around the world. This book grew out of his PhD thesis in geography at the University of British Columbia. He has also contributed to numerous periodicals, and professional and academic publications. He lives on Denman Island, BC.