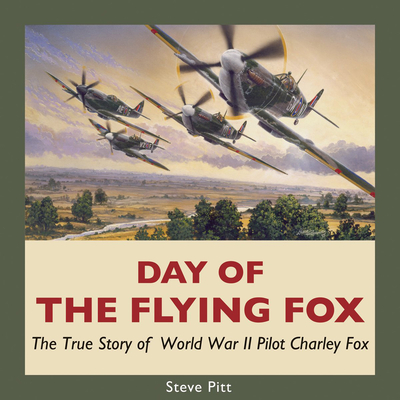 Canadian World War II pilot Charley Fox, now in his late eighties, has had a thrilling life, especially on the day in July 1944 in France when he spotted a black staff car, the kind usually employed to drive high-ranking Third Reich dignitaries. Already noted for his skill in dive-bombing and strafing the enemy, Fox went in to attack the automobile. As it turned out, the car contained famed German General Erwin Rommel, the Desert Fox, and Charley succeeded in wounding him.

Rommel, who at the time was the Germans' supreme military commander in France orchestrating the Nazis' resistance to the D-day invasion, was never the same after that. Author Steve Pitt focuses on this seminal event in Charley Fox's life and in the war, but he also provides fascinating aspects of the period, including profiles of noted ace pilots Buzz Beurling and Billy Bishop, Jr., and Great Escape architect Walter Floody, as well as sidebars about Hurricanes, Spitfires, and Messerschmitts.

Steve Pitt's first children's book, Rain Tonight: A Tale of Hurricane Hazel, was nominated for the Silver Birch, Red Cedar, and Rocky Mountain Awards. Recently, he published To Stand and Fight Together: Richard Pierpoint and the Coloured Corps of Upper Canada. He lives in Toronto.

"Most suitable for teachers or senior students interested in wartime history and how the allied air force contributed to the defeat of the German regime." - Diana Mumford, Canadian Teacher Magazine Fall 2008

One reason I think someone should buy this book is because the author has included neat facts, pictures and amazing wordplay in the margins to captivate the reader’s attention throughout the book. Also the author has written an interesting story about a non-fictional historical topic. And finally, the author has given more publicity to a well-known war hero and historical event.

Steve Pitt is an amazing writer inspired by many different things including previous books he’s read, cartoons and comics.