Shoot for the Moon: The Space Race and the Extraordinary Voyage of Apollo 11 (CD-Audio) 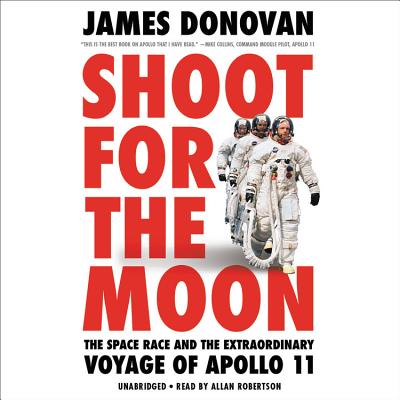 By Allan Robertson (Read by), James Donovan
This Book Is Not Sold Online - Inquire In Store
Not In Stock/Special Order

One of Publishers Weekly's Best Books of 2019—-

"If you're looking for telling of the manned space program's story, you should start with James Donovan's Shoot for the Moon."
—NPR

"Donovan's narrative is a well-crafted one...one of the best in print."
—Science Magazine

"Donovan combines his masterful research skills and narrative gifts in recounting the full story of the most famous Apollo trip...Donovan's history is a powerfully written and irresistible celebration of the Apollo missions."
—Booklist (starred review)

"Exceptionally researched, this exciting, sometimes harrowing book highlights the work not only of the pioneering astronauts but also of thousands of technicians and engineers. This is a perfect volume to commemorate the 50th anniversary of the first lunar landing and all that led up to it."
—Publishers Weekly (starred)

"Its breadth and
detail will give you a new appreciation for just how complex and dangerous this
mission was. You'll come away marveling that, against all odds, we put people
on the motherf**in' moon!"

"This is the best book on Apollo that I have read. Extensively researched and meticulously accurate, it successfully traces not only the technical highlights of the program but also the contributions of the extraordinary people who made it possible."
—Mike Collins, Command module pilot, Apollo 11