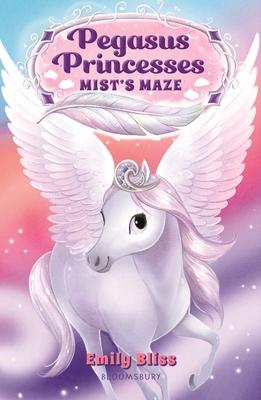 A high-flying new chapter book series from the creator of Unicorn Princesses!

When eight-year-old, pegasus-obsessed Clara Griffin is playing in the forest surrounding her family's home, she's thrilled to discover a magical silver feather and a flying armchair that transport her to the Wing Realm, the magical land of the Pegasus Princesses!

Clara finds herself in Feather Palace, home to eight pegasus sisters who each have a unique magical power, throne, and tiara. The Pegasus Princesses are delighted to meet Clara--after all, they rarely meet human girls, let alone any creature without wings! Clara learns that Princess Mist is hosting a cloud maze party in the sky above the Cloud Forest. But just before the party, Lucinda, the princesses' pet cat, knocks over and spills the entire bottle of potion that makes the cloud maze. With Clara's help, will the Pegasus Princesses figure out how to throw a new cloud maze party in time?

Featuring adorable black-and-white illustrations throughout, this magical series is full of sparkle, fun, and friendship.

Emily Bliss lives just down the street from a forest. From her living room window, she can see a big oak tree with a magic keyhole. Like Cressida Jenkins, she knows that unicorns are real.

Sydney Hanson was raised in Minnesota alongside numerous pets and brothers. In addition to her traditional illustrations, Sydney is an experienced 2D and 3D production artist and has worked for several animation shops, including Nickelodeon and Disney Interactive. In her spare time she enjoys traveling and spending time outside with her adopted brother, a Labrador retriever named Cash. She is the illustrator of the Unicorn Princesses series and the picture book, Next to You. Sydney lives in Los Angeles.
www.sydwiki.tumblr.com