Geronimo Stilton 3-in-1: The Discovery of America, The Secret of the Sphinx, and The Coliseum Con (Paperback) 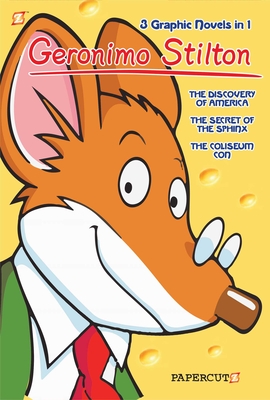 Geronimo Stilton lives in New Mouse City on Mouse Island with his friends and relatives. He works at The Rodent’s Gazette, the most famouse newspaper in New Mouse City. In these comics, Geronimo Stilton travels back in time to save the future, by protecting the past from his arch nemeses, the Pirate Cats. These devious felines plan to change history to make them supreme rulers of Mouse Island! First, Geronimo and company join Christopher Columbus on his voyage from Italy to America in 1492 to stop the Pirate Cats from taking over the New World. Then, Geronimo Stilton and friends must travel back in time to Ancient Egypt! The Pirate Cats, hope to get the face of their leader, Catardone III, immortalized on a the sphinx. Next, the Pirate Cats travel to Rome, Italy in the year 80 AD to the opening of the Coliseum. The evil felines want the world to think they designed the Coliseum. Geronimo, Thea, Benjamin, and others, must hop into the Speedrat, their awesome time machine, and expose the Pirate Cats’ evil scheme, all the while taking in historical landmarks and breathtaking moments in history.

Born in New Mouse City, Mouse Island, GERONIMO STILTON is Rattus Emeritus of Mousomorphic Literature and of Neo-Ratonic Comparative Philosophy. He is the director of The Rodent's Gazette, New Mouse City's most widely read daily newspaper. Stilton was awarded the Ratitzer Prize for his scoops on The Curse of the Cheese Pyramidand The Search for Sunken Treasure. One of his bestsellers won the 2002 eBook Award for world's best-selling electronic book. In 2006 he won a Nickelodeon Kids Choice Award and in 2008 he won the Cartoomics prize "Beyond Comics." His works have been published all over the globe. In his spare time, Mr. Stilton collects antique cheese rinds.