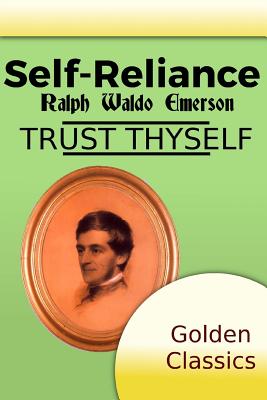 Classics for Your Collection: goo.gl/U80LCr --------- Trust Thyself In a world where people are self-conscious and have lots of self-doubt, the legendary Ralph Waldo Emerson teaches us about Self-Reliance, the success secret of people who do well in life and get success of all kind and more importantly, people who are self-fulfilled. "Self-Reliance" is Ralph Waldo Emerson's compilation of many years' works and the archetype for his transcendental philosophies. Emerson presupposes that the mind is initially subject to an unhappy conformism. Throughout the essay he gives a defense for his famous catch-phrase "Trust thyself". This argument makes three major points: that each person has his own self-contained genius, that society and worldly influences must be resisted in favor of one's own individuality, and that self-worth has great importance and value. In the first section, Emerson argues that inside of each person is genius. He writes: "To believe your own thought, to believe that what is true for you in your private heart is true for all men, - that is genius." He says that only a man who is self-reliant will be successful and any outside influences would take away from personal satisfaction. Emerson claims that examples of people who trusted themselves above all else include Moses, Plato, and John Milton. He then goes on to highlight the value of individual expression. Emerson says that a man should not worry that he will be misunderstood or thought less of because his opinions changed. He writes, "To be great is to be misunderstood." A man must be willing, every day, to open his consciousness to his intuition, whether or not what it tells him is in conflict with his past conclusions. He also states how a man should still follow his own path even if other people feel offended by this idea. He writes, "My life is for itself", "and not for a spectacle" emphasizing the idea of not following what other people think, adding to the idea that this compromises their individual values. Emerson wrote that if a person were self-reliant, he would have "consistent access to survival." He mentions how family, work, and society can hinder the ability for a man to thrive. He says that they can only stimulate his own thinking, not teach him anything. He explains how in order to be happy and peaceful, one should not care about the consumerism but should focus on his own situation. He ends with "Nothing can bring you peace but yourself." Throughout this essay, Emerson argues against conformity with the world. He argues how people should not conform to what other people in society think, but instead he should transform society with his thoughts. He gives an archetype for his own transcendental beliefs, but also argues for his slogan "trust thyself". To follow Emerson's self-reliant credo fully, one must learn to hear and obey what is most true within one's heart, and both think and act independent of popular opinion and social pressure, in order to bring satisfaction to one's self. Scroll Up and Get Your Copy Timeless Classics for Your Bookshelf
Classic Books for Your Inspiration and Entertainment Visit Us at: goo.gl/U80LCr

Ralph Waldo Emerson (May 25, 1803 - April 27, 1882), known professionally as Waldo Emerson, was an American essayist, lecturer, and poet who led the Transcendentalist movement of the mid-19th century. He was seen as a champion of individualism and a prescient critic of the countervailing pressures of society, and he disseminated his thoughts through dozens of published essays and more than 1,500 public lectures across the United States. Emerson gradually moved away from the religious and social beliefs of his contemporaries, formulating and expressing the philosophy of Transcendentalism in his 1836 essay, "Nature". Following this ground-breaking work, he gave a speech entitled "The American Scholar" in 1837, which Oliver Wendell Holmes Sr. considered to be America's "Intellectual Declaration of Independence". Emerson wrote most of his important essays as lectures first, then revised them for print. His first two collections of essays Essays: First Series and Essays: Second Series, published respectively in 1841 and 1844-represent the core of his thinking, and include such well-known essays as "Self-Reliance", "The Over-Soul", "Circles", "The Poet" and "Experience". Together with "Nature", these essays made the decade from the mid-1830s to the mid-1840s Emerson's most fertile period. Emerson wrote on a number of subjects, never espousing fixed philosophical tenets, but developing certain ideas such as individuality, freedom, the ability for humankind to realize almost anything, and the relationship between the soul and the surrounding world. Emerson's "nature" was more philosophical than naturalistic: "Philosophically considered, the universe is composed of Nature and the Soul". Emerson is one of several figures who "took a more pantheist approach by rejecting views of God as separate from the world." He remains among the linchpins of the American romantic movement, and his work has greatly influenced the thinkers, writers and poets that have followed him. When asked to sum up his work, he said his central doctrine was "the infinitude of the private man." Emerson is also well known as a mentor and friend of fellow Transcendentalist Henry David Thoreau.