A Vast Conspiracy: The Real Story of the Sex Scandal That Nearly Brought Down a President (MP3 CD) 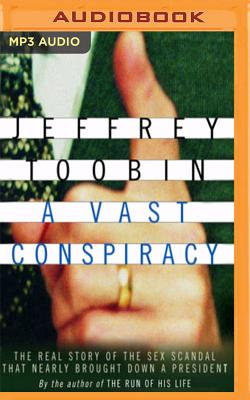 By Jeffrey Toobin, Kevin Stillwell (Read by)
$9.99
Unavailable, Out of Stock, or Out of Print

In A Vast Conspiracy, the best-selling author of The Run of His Life casts an insightful, unbiased eye over the most extraordinary public saga of our time - the Clinton sex scandals. A superlative journalist known for the skillfulness of his investigating and the power of his writing, Jeffrey Toobin tells the unlikely story of the events that began over doughnuts in a Little Rock hotel and ended on the floor of the United States Senate, with only the second vote on presidential removal in American history. This is an entirely fresh look at the scandal that very nearly brought down a president.

Packed with news-making disclosures and secret documents published here for the first time, Toobin unravels the three strands of a national scandal - those leading from Paula Jones, Kenneth Starr, and Monica Lewinsky - that created a legal, personal, and political disaster for Bill Clinton. A Vast Conspiracy is written with the narrative drive of a sensational (if improbable) legal thriller, and Toobin brilliantly explores the high principle and low comedy that were the hallmarks of the story. From Tripp to Goldberg, Isikoff to Hyde, the complex and tangled motivations behind the scandal are laid bare.