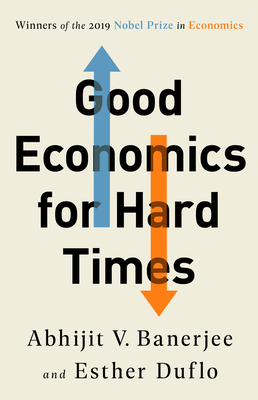 The winners of the Nobel Prize show how economics, when done right, can help us solve the thorniest social and political problems of our day.

Figuring out how to deal with today's critical economic problems is perhaps the great challenge of our time. Much greater than space travel or perhaps even the next revolutionary medical breakthrough, what is at stake is the whole idea of the good life as we have known it.

Immigration and inequality, globalization and technological disruption, slowing growth and accelerating climate change--these are sources of great anxiety across the world, from New Delhi and Dakar to Paris and Washington, DC. The resources to address these challenges are there--what we lack are ideas that will help us jump the wall of disagreement and distrust that divides us. If we succeed, history will remember our era with gratitude; if we fail, the potential losses are incalculable.

In this revolutionary book, renowned MIT economists Abhijit V. Banerjee and Esther Duflo take on this challenge, building on cutting-edge research in economics explained with lucidity and grace. Original, provocative, and urgent, Good Economics for Hard Times makes a persuasive case for an intelligent interventionism and a society built on compassion and respect. It is an extraordinary achievement, one that shines a light to help us appreciate and understand our precariously balanced world.

In this ambitious, provocative book Abhijit V. Banerjee and Esther Duflo show how traditional western-centric thinking has failed to explain what is happening to people in a newly globalized world: in short Good Economics has been done badly. This precise but accessible book covers many of the most essential issues of our day--including migration, unemployment, growth, free trade, political polarization, and welfare. Banerjee and Duflo will confound and clarify the presumptions of our times, such as:


In doing so, they seek to reclaim this essential terrain, and to offer readers an economist's view of the great issues of the day--one that is candid about the complexities, the zones of ignorance, and the areas of genuine disagreement.

"Excellent...Few have grappled as energetically with the complexity of real life as Esther Duflo and Abhijit Banerjee, or got their boots as dirty in the process...A treasure trove of insight...[Readers] will be captivated by the authors' curiosity, ferocious intellects and attractive modesty."—The Economist


"Carefully argued and backed with research...Good Economics is an effective response to Banerjee and Duflo's more thoughtful critics, some of whom argued that devotion to randomised trials had led to a narrowing of economics, in which complex questions that could not be scientifically tested should simply be set aside. The authors make a convincing case that empirical economics contains answers to many vexing problems, from populism to identity politics, especially when economists are willing to range outside their discipline's confines."—Financial Times

"'Good Economics for Hard Times' lives up to its authors' reputations, giving a masterly tour of the current evidence on critical policy questions facing less-than-perfect markets in both developed and developing countries, from migration to trade to postindustrial blight."—Wall Street Journal

"Their goal is to ground both sides of our national debate in hard evidence, and the process of coming up with ways to do that is pretty interesting in itself... Eager to distance themselves from the previous generation of economists who argued from first principles, Banerjee and Duflo say nothing that smells like special pleading. It would be hard to take umbrage with such studied humility. The authors admit, 'We clearly don't have all the solutions, and suspect no one else does either.' Even so, the prospect of a path towards consensus solutions through iterated experiments is enough to make for a compelling read."—National Review

"The studies they cite probe hot topics such as climate change, immigration and the viability of continued economic growth. Banerjee and Duflo synthesize the literature on what is agreed and what is controversial in an accessible, often entertaining way."—Nature

"Good Economics for Hard Times makes important policy connections and suggestions... Banerjee and Duflo explore traditional remedies (tariffs sure aren't the answer, they find, and job retraining and other trade adjustment tools are too narrow and take too long) and suggest some novel ideas... In crafting their carefully reasoned arguments, they marshal evidence assembled over decades from all sorts of areas-the fight against malaria, past efforts at tax reform, previous waves of migration-and propose commonsense solutions."—Foreign Policy

"Lucid and frequently surprising... Banerjee and Duflo's arguments are original and open-minded and their evidence is clearly presented. Policy makers and lay readers looking for fresh insights into contemporary economic matters will savor this illuminating book."—Publishers Weekly, Starred Review

"A canard-slaying, unconventional take on economics...This might look like yet another conventional state-of-the-world economics book, but it is anything but. It is an invigorating ride through 21st-century economics and a treasure trove of facts and findings."—The Times (UK)

"Good Economics for Hard Times lives up to its authors' reputations, giving a masterly tour of the current evidence on critical policy questions facing less-than-perfect markets in both developed and developing countries, from migration to trade to postindustrial blight."—William Easterly, The Wall Street Journal

"An excellent antidote to the most dangerous forms of economics bashing...Abhijit Banerjee and Esther Duflo, write beautifully and are in full command of their subject. Perhaps the greatest contribution of Good Economics... is precisely this: it demonstrates both the brilliant insights that mainstream economics can make available to us and its limits, which a progressive internationalism has a duty to transcend."
—Yanis Varoufakis, The Guardian

"Not all economists wear ties and think like bankers. In their wonderfully refreshing book, Banerjee and Duflo delve into impressive areas of new research questioning conventional views about issues ranging fromtrade to top income taxation and mobility, and offer their own powerful vision of how we can grapple with them. A must-read."—Thomas Piketty, professor, Paris School of Economics, andauthor of Capital in the Twenty-first Century

"A magnificent achievement, and the perfect book
for our time. Banerjee and Duflo brilliantly illuminate the largest
issues of the day, including immigration, trade, climate change, and
inequality. If you read one policy book this year -- heck, this decade -
read this one."—Cass R. Sunstein, Robert Walmsley University Professor,Harvard University, and author, How Change Happens

"Banerjee and Duflo have shown brilliantly how the best recent research in economics can be used to tackle the most pressing social issues: unequal economic growth, climate change, lack of trust in public action. Their book is an essential wake-up call for intelligent and immediate action!"—Emmanuel Saez, professor of economics at UC Berkeley

"One of the things that makes economics interesting and difficult is the need to balance the neat generalities of theory against the enormous variety of deviations from standard assumptions: lags, rigidities, simple inattention, society's irrepressible tendency to alter what are sometimes thought of as bedrock characteristics of economic behavior. Banerjee and Duflo are masters of this terrain. They have digested hundreds of lab experiments, field experiments, statistical studies, and common observation to find regularities and irregularities that shape important patterns of economic behavior and need to be taken into account when we think about central issues of policy analysis. They do this with simple logic and plain English. Their book is as stimulating as it gets."—Robert Solow, Nobel Prize winner and emeritus professor of economics, Massachusetts Institute of Technology

"In these tumultuous times when many bad policies and ideas are bandied around in the name of economics, common sense-and good economics-is even more sorely needed than usual. This wide-ranging and engaging book by two leading economists puts the record straight and shows that we have much to learn from sensible economic ideas, and not just about immigration, trade, automation, and growth, but also about the environment and political discourse. A must-read."—Daron Acemoglu, Elizabeth and James Killian Professor of Economics, MIT, and coauthor of Why Nations Fail

"Banerjee and Duflo move beyond the simplistic forecasts that abound in the Twittersphere and in the process reframe the role of economics. Their dogged optimism about the potential of economics research to deliver makes for an informative and uplifting read."—Pinelopi Goldberg, Elihu Professor of Economics, Yale University, and chief economist of the World Bank Group

"In Good Economics for Hard Times, Banerjee and Duflo, two of the world's great economists, parse through what economists have to say about today's most difficult challenges-immigration, job losses from automation and trade, inequality, tribalism and prejudice, and climate change. The writing is witty and irreverent, always informative but never dull. Banerjee and Duflo are the teachers you always wished for but never had, and this book is an essential guide for the great policy debates of our times."—Raghuram Rajan, Katherine Dusak Miller Distinguished Service Professor of Finance at the University of Chicago Booth School of Business