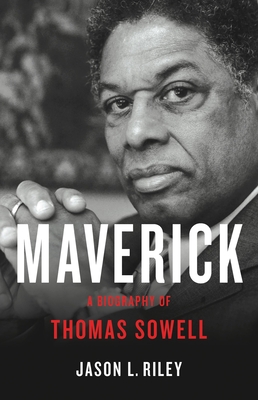 A biography of Thomas Sowell, one of America's most influential conservative thinkers. Thomas Sowell is one of the great social theorists of our age. In a career spanning more than a half century, he has written over thirty books, covering topics from economic history and social inequality to political theory, race, and culture. His bold and unsentimental assaults on liberal orthodoxy have endeared him to many readers but have also enraged fellow intellectuals, the civil-rights establishment, and much of the mainstream media. The result has been a lack of acknowledgment of his scholarship among critics who prioritize political correctness. In the first-ever biography of Sowell, Jason L. Riley gives this iconic thinker his due and responds to the detractors. Maverick showcases Sowell's most significant writings and traces the life events that shaped his ideas and resulted in a Black orphan from the Jim Crow South becoming one of our foremost public intellectuals.

Jason L. Riley is a senior fellow at the Manhattan Institute and a columnist for the Wall Street Journal. He is the author of several previous books, including Please Stop Helping Us: How Liberals Make It Harder for Blacks to Succeed.

“Fascinating… Riley has achieved something rare in the field of intellectual biography­ — a recounting of a distinguished scholar’s life that draws on popular interest in Thomas Sowell the person and directs it to a lucid survey of Sowell’s volumi­nous intellectual output.”—National Review

“Sowell’s vast and diverse intellectual output, devoured over the decades by a loyal readership, screamed for a biography a long time ago. Jason Riley delivers, in a pleasing style that arrives as a must-read for any fan of Thomas Sowell, what the public so wanted but inexplicably did not receive until now.”—American Spectator

“Riley’s presentation of Sowell and his ideas is particularly important because it comes at a time when the Republican Party stresses its interest in reaching out to working-class and non-white voters. Sowell is one of the most influential black conservatives of the past 100 years.”—Daily Caller

“Riley, a senior fellow at the Manhattan Institute and columnist for the Wall Street Journal, has done an admirable job distilling Sowell’s 90 years, 30-odd books, and countless columns into a single volume. Maverick will delight Sowell’s biggest fans and help introduce new generations to the man and his work.”—Washington Free Beacon

“An idea-centered life of the noted economist and political commentator. . . . This will be valuable to students of economics, Black conservatism, and public policy.”
—Kirkus

“Thomas Sowell is among the most brilliant thinkers in the world today—deep, original, creative, fearless, intimidatingly erudite. His gripping and improbable life story can only magnify one’s awe at this astonishing man’s accomplishments.”—Steven Pinker, Johnstone Professor of Psychology, Harvard University, and the author of How the Mind Works and Enlightenment Now

“Maverick is a brilliant intellectual biography of one of the most important thinkers of our time.  Jason Riley writes lucidly and engagingly, illuminating ideas of Sowell’s that are more timely today than ever, dispelling many myths along the way.”
—Amy Chua, Yale Law professor and author of Battle Hymn of the Tiger Mother and Political Tribes: Group Instinct and the Fate of Nations

—John McWhorter, Professor of Linguistics at Columbia University, Contributing Editor at the Atlantic, and Host of Slate's Lexicon Valley

“With the publication of “Maverick,” Jason Riley has rendered  an enormous service by providing a compelling, informed and elegant intellectual biography of the great Thomas Sowell. It was obviously a labor of love. As a professional economist and Windy City native, I especially appreciated Riley's nuanced, deeply researched account of Sowell's roots in the Chicago School of economic thought, as it was led by Milton Friedman and George Stigler in the 1950s and 1960s.”—Glenn Loury, Professor of Economics, Brown University

“There are two important ambitions at work in this book. The first gives historical context to Thomas Sowell’s extraordinary genius. The second shows how his work spawned a new, post-60s conservative consciousness in black America. It looks with openness and courage at the often-awkward encounter between conservatism and racial conflicts. But most of all, this is the inspiring story of one of the greatest American thinkers who has ever lived.”
—Shelby Steele, senior fellow at the Hoover Institution and author of Shame