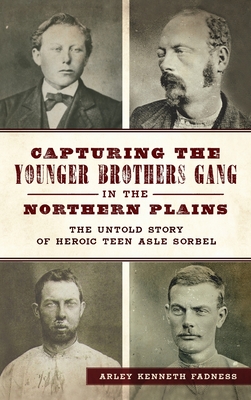 Capturing the Younger Brothers Gang in the Northern Plains: The Untold Story of Heroic Teen Asle Sorbel is a historic tale of vigilante valor

Near sleepy Hanska slough, September 21, 1876, Norwegian teen Asle Sorbel made a daring Paul Revere ride into Madelia, Minnesota. His efforts, and those of the Madelia Magnificent Seven, led to the capture of the Younger Brothers of the Jesse James-Younger Gang. The gang's botched Northfield bank raid and infamous Madelia Shoot Out were well reported. But, Alse's story was lost to history. Friends of the outlaws planned reprisals. Alse changed his name, his persona and his location. He kept his mount shut. In 1883, he quietly reestablished himself in Dakota Territory. As years passed, he became the premier horse doctor in the Webster, South Dakota area, all the while haunted by vigilant fear.