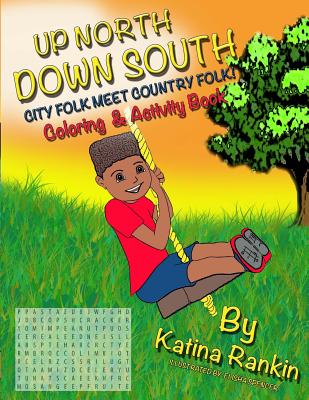 "Up North, Down South: City Folk Meet Country Folk" Coloring and Activity Book is an educational aid to help children with their learning journey from New York to Mississippi. The coloring and activity book is packed with puzzles, mazes, color pages, word searches, crosswords, and connect the dot activities to stimulate their minds on their scholastic road.

Katina Rankin, a native of Magee, is a journalist. She is the evening anchor for WATN-TV (ABC) in Memphis, TN. She received her bachelor's degree in mass communications from Alcorn State University and her master's degree in broadcast journalism from Jackson State University. While attending ASU, Katina began her journalism career as an intern at WLBT. After six years on the air in Mississippi, Katina's career led her to Raleigh-Durham, North Carolina, where she co-anchored the main newscast at Eyewitness News. During her journalism career, Katina has covered everything from the Mississippi murder trials of Byron De La Beckwith and Sam Bowers to the Space Shuttle Columbia disaster in Texas. She has featured local Miss America Pageant contestants by following them to Atlantic City, and she has traveled to San Antonio for the Final Four tournaments. Katina's daily reports about the impact of Hurricane Katrina included an in-depth interview with Mississippi Governor Haley Barbour. She also interviewed notable figures and broke many stories in the lacrosse rape investigation at Duke University in North Carolina. Katina has also interviewed former NAACP president Myrlie Evers, presidential candidate John Edwards, the late Rosa Parks, the Reverend Jesse Jackson, the Reverend Al Sharpton, basketball greats Magic Johnson and Charles Barkley, and blues legend B.B. King. Katina also distinguished herself as a journalist by earning several awards. After more than seventeen years in broadcast and print media, Katina felt entrepreneurial, and she founded Katina Rankin Enterprises (KRE), a public relations firm. Katina's public relations work took her to three countries: Israel, Egypt, and Palestine. Katina's passion is helping people. She has given back to the community by speaking to hundreds of church groups, schools, and universities through the years. Katina believes proper training can help individuals realize their potential and help them get to the next level. Katina has also taught writing classes at Jackson State University. Katina has also given the commencement address at Alcorn State University. And she has been featured on the Oprah Winfrey Show. She is a member of Alpha Kappa Alpha Sorority, Inc., the National Academy of Television Arts and Sciences, and the National Association of Black Journalists. Katina has authored and recently published "Up North, Down South: City Folk Meet Country Folk," a children's book.