Dissent: The Radicalization of the Republican Party and Its Capture of the Court (Hardcover) 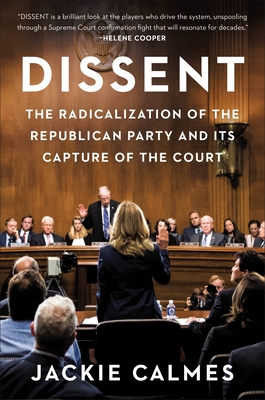 Featuring new interviews with his accusers and overlooked evidence of his deceptions, a deeply reported account of the life and confirmation of Brett Kavanaugh, set against the conservative movement's capture of the courts.

In DISSENT, award-winning investigative journalist Jackie Calmes brings readers closer to the truth of who Supreme Court Justice Brett Kavanaugh is, where he came from, and how he and the Republican party at large managed to secure one of the highest seats of power in the land.

Kavanaugh's rise to the justice who solidified conservative control of the supreme court is a story of personal achievement, but also a larger, political tale: of the Republican Party's movement over four decades toward the far right, and its parallel campaign to dominate the government's judicial branch as well as the other two.

And Kavanaugh uniquely personifies this history. Fourteen years before reaching the Supreme Court, during a three-year fight for a seat on the D.C. Circuit Court of Appeals, Democratic Senator Dick Durbin would say to Kavanaugh, "It seems that you are the Zelig or Forrest Gump of Republican politics. You show up at every scene of the crime."

Featuring revelatory new reporting and exclusive interviews, DISSENT is a harrowing look into the highest echelons of political power in the United States, and a captivating survey of the people who will do anything to have it.

Jackie Calmes has been a journalist in Washington for nearly four decades. She is a columnist for the Los Angeles Times, based in Washington and writing on national politics and issues. She was a White House correspondent for the New York Times during the Obama administration as well as a national politics reporter and chief economic correspondent. During eighteen years at the Wall Street Journal, she covered Congress and the White House and ultimately became the chief political correspondent. She first worked in Washington as a reporter for Congressional Quarterly. A native of Ohio, she began her career in Texas, where she covered state government and politics from Austin for the Dallas Morning News and, before that, for the Harte-Hanks newspaper chain.

"With a depth of research and a palpable love of politics, Jackie Calmes tells the story of the GOP's journey to power and the reckoning the party now faces as it struggles to contain the forces it unleashed. DISSENT is a brilliant look at the players who drive the system, unspooling through a Supreme Court confirmation fight that will resonate for decades."—Helene Cooper, New York Times bestselling author of THE HOUSE AT SUGAR BEACH and MADAME PRESIDENT

"The steady rise and tumultuous confirmation of Brett Kavanaugh—and with that, conservative command of the Supreme Court—reflects the transformation of the GOP, decades in the making and still underway. Clear-eyed and tough-minded, drawing on 40 years as a journalist and more than 200 interviews, Jackie Calmes takes us behind the scenes to see how it happened, and to understand the repercussions that will reverberate for years ahead. DISSENT is engaging, insightful and, at times, alarming."—Susan Page, New York Times bestselling author of THE MATRIARCH

"Jackie Calmes—one of the most insightful journalists in Washington, or anywhere else—brings fresh behind-the-scenes reporting and crackling narrative to the story of how the decades-long conservative project to remake the judiciary collided with the #MeToo movement. The bruising battle over Brett Kavanaugh's Supreme Court nomination exposed the fragility of our institutions and our political system, and neither has yet to recover."—Karen Tumulty, Washington Post political columnist

"Jackie Calmes, a savvy veteran Washington reporter who recognized the growing radicalization of the Republican Party decades before most everyone else, has written a sophisticated analysis of contemporary American politics through the lens of Brett Kavanaugh’s history, leading to his nomination and confirmation as a justice of the Supreme Court. DISSENT presents a riveting narrative with fresh insights to the most hotly contested judicial confirmation battle in American history and importantly links it to profound developments that define the troubled state of our democracy."
—Thomas E. Mann and Norman J. Ornstein, New York Times bestselling authors of THE BROKEN BRANCH and IT'S EVEN WORSE THAN IT LOOKS

"Brett Kavanaugh’s journey is not merely the story of one the most tumultuous Supreme Court nominating battles in history. As Jackie Calmes' brilliant book reveals, Kavanaugh’s rise also tracks the evolution of Republican politics and the right-wing takeover of our highest court."—David Axelrod, former chief strategist to President Obama, director of the University of Chicago Institute of Politics, CNN senior commentator and host of "The Axe Files" podcast

"Jackie Calmes persuasively describes how, with a little luck and more than a little duplicity, Republicans have virtually assured a conservative-dominated Supreme Court for the foreseeable future. The focus is on the nomination battle over Brett Kavanaugh, a very smart and very partisan jurist with, as she details, 'a troubling pattern of shading the truth.' But the backdrop is the radicalization of the Republican Party over recent decades. DISSENT should be read by anyone who cares about the Supreme Court and, more broadly, a fair and honest political process."

“A scrupulous history of the Republican Party’s efforts to put a conservative 'lock' on the Supreme Court. [Calmes] lucidly and comprehensively explains the mechanics of the ‘ascendant conservative legal movement.’"

"A fascinating look not only into the life and career of Kavanaugh, but also into the American conservative movement's successful long-term plan to move the Supreme Court rightward. Calmes is a first-rate reporter, and her skills are on full display here. Riveting...DISSENT is a remarkable work of reportage."—NPR

"Ambitious...Calmes’s book stands out for how well she details the ways judicial confirmations have devolved into 'a gang war' endlessly provoking 'retaliatory hits.'"—Washington Post