Shut Out: How a Housing Shortage Caused the Great Recession and Crippled Our Economy (Hardcover) 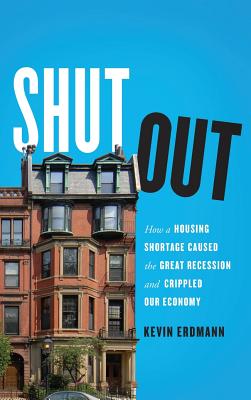 The United States suffers from a shortage of well-placed homes. This was true even at the peak of the housing boom in 2005. Using a broad array of evidence on housing inflation, income, migration, homeownership trends, and international comparisons, Shut Out demonstrates that high home prices have been largely caused by the constrained housing supply in a handful of magnet cities leading the new economy. The same phenomenon is occurring in leading countries across the globe. Gentrifying cities have become exclusionary bastions in the new postindustrial economy. The US housing bubble that peaked in 2005 is more accurately described as a refugee crisis than a credit bubble. Surging demand for limited urban housing triggered a spike of migration away from the magnet cities among households with moderate and lower incomes who could no longer afford to remain, causing a brief contagion of high prices in the cities where the migrants moved. In this book, author Kevin Erdmann observes that the housing bubble has been broadly and incorrectly attributed to various "excesses." Policymakers and economists concluded that our key challenge was that we had built too many homes. This misdiagnosis of the problem, according to Erdmann, led to misguided public polices, which were the primary cause of the subsequent financial crisis. A sort of moral panic about supposed excesses in home lending and construction led to destabilizing monetary and regulatory decisions. As the economy slumped, a sense of fatalism prevented the government from responding appropriately to the worsening situation. Shut Out provides a much-needed correction to the causes and consequences of financial crises and secular stagnation.

Kevin Erdmann was a small business owner for 17 years. In 2010, he sold his business and earned his master's degree in finance from the University of Arizona, which grounded his real-world experience of investing in the rigor of the academy. In 2013, he began blogging at idiosyncraticwhisk.com to share his contrarian observations about investment strategies and research. He was surprised to uncover evidence that seemed to contradict conventional narrative and common assumptions about the housing bubble and the financial crisis. As the evidence accumulated, he developed a new account of the causes of the housing bubble and financial crisis. That account eventually became a two-book project, Shut Out and a follow-up book still in development, both of which synthesize and expand on the housing theories he originally published on his blog. He lives in Gilbert, Arizona, with his wife and three children.