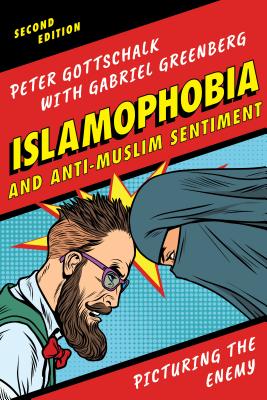 By Peter Gottschalk, Gabriel Greenberg
This Book Is Not Sold Online - Inquire In Store

In the minds of many Americans, Islam is synonymous with the Middle East, Muslim men with violence, and Muslim women with oppression. A clash of civilizations appears to be increasingly manifest and the war on terror seems a struggle against Islam. These are all symptoms of Islamophobia. Meanwhile, the current surge in nativist bias reveals the racism of anti-Muslim sentiment. This book explores these anxieties through political cartoons and film--media with immediate and important impact. After providing a background on Islamic traditions and their history with America, it graphically shows how political cartoons and films reveal Americans' casual demeaning and demonizing of Muslims and Islam--a phenomenon common among both liberals and conservatives. Islamophobia and Anti-Muslim Sentiment offers both fascinating insights into our culture's ways of "picturing the enemy" as Muslim, and ways of moving beyond antagonism.

Peter Gottschalk is professor of religion at Wesleyan University. His books--which include American Heretics and Religion, Science, and Empire--draw on his research and experience in India, Pakistan, and the United States. Gabriel Greenberg serves as the rabbi of a synagogue in New Orleans, where he lives with his family.